Why this “Bernie guy” is voting for Hillary 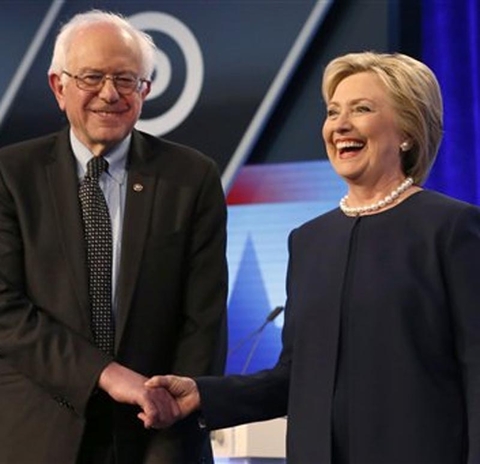 I voted for Bernie Sanders because, not in spite of, the fact he is a Socialist. And I'm voting for Hillary Clinton in the general election because she is right on the issues. AP Photo, Wilfredo Lee, File.

The November, I will vote in my thirteenth presidential election. Earlier this year, I was hoping that I would be voting for Bernie Sanders, because – not in spite of – the fact that he is a Socialist. Well, I got my chance in the Oklahoma primary, and he carried Oklahoma decisively. But he didn’t get the nomination – Hillary Clinton did.

Still, Bernie achieved a lot in his run for the nomination. I think that he pulled Hillary further to the left than she would have been if she had been unopposed. And I think this election is so important to the future of our country that it is imperative that we elect Hillary Clinton President.

So I will be voting for her on November 8. And I want to make it clear that I am voting for Clinton, not against Donald Trump. So here’s why.

Clinton is right on LGBTQ rights and equality. She will work with Congress to pass the long stalled Equality Act to bring full equality across the country to our community. She will end “conversion therapy,” and work to solve the problem of homeless LGBTQ youth. And she will put an end to the institutionalized bigotry against our transgender brothers and sisters that is practiced in many states.

LGBTQ rights are at the top of my list, but there are several other issues close to my heart, and Hillary is right there with me

The most important job we have as a country is educating our children – and we aren’t doing a very good job of it. If you are white and middle class, your kids are probably getting a pretty good education. But if you live in poverty, or are a person of color, that probably is not so. Hillary has a clear plan to improve education in our country, regardless of the neighborhood you live in.

She will start by equipping our educators for success, and elevating them to the status that they deserve for the important job they are doing. Hillary Clinton has been an advocate for good education since she was a student in law school, and has continued in that advocacy right up until today.

Our criminal “justice” system, as currently configured, is a national disgrace. Mandatory minimum sentences, and the so-called War on Drugs have resulted in us having more people in prison that any other civilized country. The system is racist and classist in the extreme. Hillary is for reforming the system. It will not be an easy task.

She has a clearly laid out plan to improve community/police relations, end mass incarceration, and take the federal focus off targeting marijuana possession, and putting it on violent crime, where it belongs. She advocates letting states that have enacted enlightened marijuana laws be a “laboratory” for action in this area. I don’t think she is “there” yet on marijuana, but hope that she will evolve.

And Clinton has a plan to get the country out of the mire of racial prejudice. It won’t be easy, because the legacy of slavery still affects how we govern, educate and police; where we live; and how our interpersonal relationships are carried out. But Hillary appeals to the best of our country, instead of pandering to the racist among us.

I could go on and on. I am for immigrant rights, and I don’t give a damn about whether a person is legal or undocumented. They are all human beings and deserve to be treated as human beings.

I think people should be able to join labor unions and have a countervailing force in the workplace to corporations that take advantage of their workers.

Hillary is right on all these too. She has issue positions on dozens of issues that are important to our country. You can take a look at all of them at www.HillaryClinton.com/issues. And after you do, I urge you to go to the polls on November 8, and vote for Hillary Rodham Clinton.

The Gayly does not necessarily endorse either candidate. The opinions expressed in this column are those of the columnist.