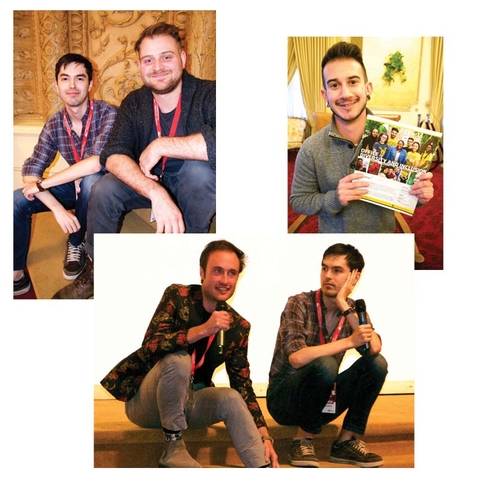 The 17th annual Tallgrass Film Festival kicked off in mid-October with a wonderfully offbeat evening of LGBTQ+ related films and a big gala party at the Old Union Station in downtown Wichita.

The main feature was James Sweeney's snappy off-beat millennial age comedy straight up that paid homage to the off-beat romantic comedy of the past such as Katherine Hepburn and Spencer Tracy.

The film cleverly touches on a wide variety of the spectrum of sexuality as the insecure protagonist, played by Sweeney, wonders if he might not actually be gay and develops a non-sexual but loving relationship with an aspiring lovelorn actress played by Katie Findlay.

A special treat was that the music for the film was composed by Logan Nelson, who grew up in Wichita and studied at the University of Southern California. He is rapidly making a name for himself in the music world. Though just 22-years-old, Nelson was recently named the best young film composer in the world by a major film music organization.

According to Tallgrass staff, they were not aware Nelson was a Wichita native when the film was chosen. The wonderful Straight Up cast of characters represented all shades of the rainbow and presented one of the best views of the depth of diversity in our current anxious age.

The presentation was supported by the Office of Diversity and Inclusion at Wichita State University.

An even more off-beat comedy directed by charming Australian filmmaker, Jake Shannon started the evening. The wacky film is about a depressed gay man who has managed to get engaged to a woman but must break off the relationship and is afraid to do so.

He manages to meet and take advice from a talking salmon - the fish kind! Sammy, the salmon, was inspired when Shannon was looking up animals who have same-sex relationships and discovered that not only penguins and giraffes have gay relationships, so do salmon.

The sardonic fishy fun continued from there.

On the serious side, Shannon developed the idea for the film when same-sex marriage was being intensely debated in Australia.

I had the opportunity to speak with both filmmakers who were delighted to have their films shown in the Heartland. Shannon wrapped up the evening when he told me the evening was “basically about connections.”

Other festival films with LGBTQ+ themes included a group of eight short films, including Sav Rodgers hilarious Queen for a Day and Trixie Mattel: Moving Parts (presented by Wichita’s Positive Directions) were presented under the LGBTQ+ umbrella. You could feel the pride.

Once again, the Tallgrass film festival has presented a relevant and entertaining selection of contemporary queer cinema.