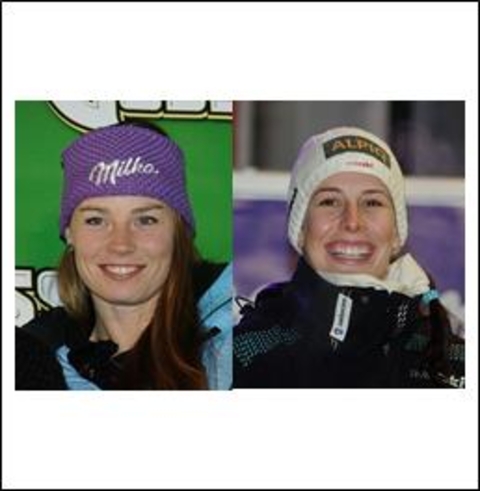 Krasnaya Polyana, Russia (AP) — Slovenia's Tina Maze and Switzerland's Dominique Gisin took different paths on an Olympic downhill filled with flats and turns, jumps and bumps, across slender trees' shadows, along snow that was icy at the top, soft at the bottom.

Any variable could have made the slightest difference over the more than 1½ miles (2½ kilometers). Gisin, the eighth woman down the Rosa Khutor course, was good enough early and fantastic at the end. A half-hour later, starting 20th, Maze followed a tighter line, faster than Gisin most of the way, until slowed by a mistake shortly before the final leap.

"Maybe just one finger, maybe just a hand — it can change a color of a medal," Maze said.

During the flower ceremony, Maze and Gisin held hands while they climbed together to the top step of the podium, a scene Maze described as "two happy faces."

Quite a contrast from Monday's super-combined, when Maze wore a stern expression after finishing fourth, merely a tenth of a second slower than bronze medalist Julia Mancuso of the United States.

"It's just that lower of a tuck or that cleaner of a line that makes you that much faster," said American Laurenne Ross, who finished 11th Wednesday.

While other Winter Games sports such as speedskating and luge break down times to the thousandths of a second, Alpine skiing does not — it didn't even go to hundredths until the 1964 Olympics — and ties happen occasionally. Maze was even in a three-way tie for first in a 2002 World Cup giant slalom. And get this: The first of Gisin's three World Cup victories came via a tie with Swedish star Anja Paerson in 2009. That was the last time first place was shared in a top-level women's downhill.

"Hundredths are fine with me," Gisin said with a hearty chuckle, "and today, the hundredths were on my side."

According to Peter Huerzeler of Omega, all three timing systems used Wednesday had the same results for Maze and Gisin. Huerzeler said the system is capable of measuring thousandths of a second — even millionths, he said — but isn't calibrated that way for Alpine events, because the International Ski Federation doesn't want it to be.

This was the fifth tie in Olympic skiing, but the others involved an extra silver or bronze. Most recently, two silvers were awarded for the men's super-G at the 1998 Nagano Games.

On a sunny day, with the temperature approaching 50 degrees (10 Celsius), Maze and Gisin were evenly matched. Their career arcs have been wildly divergent.

Maze, 30, adds this gold to the two Olympic silvers she won in 2010, along with the 2013 overall World Cup title she earned with 11 race victories and a record point total. She owns six world championship medals, including two golds. Things were tougher lately; her first win this season came in her 22nd World Cup race, last month.

"A year of highs and lows. But her objective was the Olympics, and she did it," said Andrea Vianello, Maze's ski technician.

He previously worked with Gisin and declared: "For me, it's like winning twice."

Because she was one of the first skiers, Gisin sat in the leader's box for what must have seemed like forever, waiting as others got their chance. Mancuso was eighth. Super-combined silver medalist Nicole Hosp of Austria was ninth. Super-combined champion Maria Hoefl-Riesch of Germany was 13th.

Mostly, Gisin waved and smiled for TV cameras. She also cried during a cell phone call to her grandparents, who used to take Gisin skiing as a kid.

"They did so much for me; my whole family did," Gisin said. "This is just very nice, to share it with them."

Gisin, 28, owns zero world championship medals. She crashed in her only 2010 Olympic race, the downhill, getting a concussion. She's had nine — yes, nine! — knee operations, seven on the right one, and thought about leaving the sport each time.

"It's the story of my career. Up, down, forward, backward," Gisin said. "Every little tiny bit, I (fought) for, and it makes me proud that finally I made it to the top."

So what if she had company?