3 seniors charged with hazing freshman on 'No Gay Thursday' 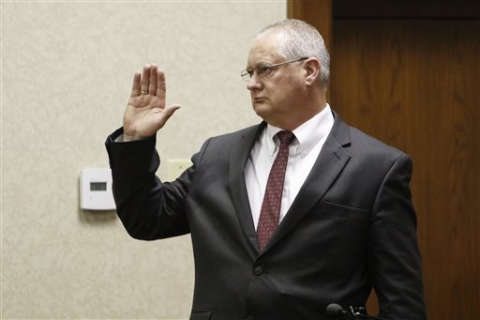 Detective Rodney Burns is sworn in as a witness before Judge Robert Philyaw during a preliminary hearing in Chattanooga for Ooltewah High School officials accused of failing to report a sexual assault. (Dan Henry/Chattanooga Times Free Press via AP, File)

Three senior football players at a suburban Philadelphia high school have been charged with assaulting a freshman with a broom handle on what the team called "No Gay Thursday," a prosecutor announced Friday.

Three 17-year-old students at Conestoga High School held down a 14-year-old boy on Oct. 15 and penetrated him with the broom handle while he screamed, Chester County District Attorney Tom Hogan said.

After the charges were announced, longtime head football coach John Vogan was suspended from all coaching duties pending the outcome of an investigation by the Tredyffrin/Easttown School District.

The school investigation will "determine whether or not code of conduct violations occurred, the awareness and level of supervision provided by the coaching staff, and what further measures can promote inclusive and respectful behavior," Superintendent Richard Gusick wrote on the district's website, adding that students could face "firm but fair consequences."

There is no evidence the coaching staff was aware of the assault on the 14-year-old or the team's hazing culture, Hogan said, because coaches typically stayed out of the locker room.

"This was generally upperclassmen doing this to the underclassmen. Bigger kids doing it to smaller kids. Hazing," he said.

Vogan told The Associated Press that he had no comment.

The suspects were charged as juveniles with assault, conspiracy, unlawful restraint, terroristic threats and other offenses.

They will not face sexual assault charges because the law requires a motive of sexual gratification, which was not the case here, Hogan said.

Authorities said the assault occurred after underclassmen were told to strip to their underwear and clean the team locker room at the school in Berwyn, about 25 miles northwest of Philadelphia. The 14-year-old stripped to his boxers, but when he decided he wanted no further part of it and tried to leave the locker room, he was blocked, held down and attacked, the prosecutor said.

The 14-year-old was arrogant about making the varsity team, and that rankled the older players, Hogan said.

"It just happened to be a perfect storm of this 'No Gay Thursday' tradition and them not liking this freshman and taking it out on him in a pretty horrible way," he told the AP.

"No Gay Thursdays" was a tradition started by the football team at least three or four years ago, in which behavior the team normally considered to be "gay" was considered "not gay" on Thursdays, Hogan said.

He said the players also had a tradition of what they called "blessing each other," in which a student, with his hand spread wide, would hit another player on the backside or back with such force it would leave a five-fingered mark.

Some players would avoid the locker room on Thursdays, and some quit altogether because of the hazing, Hogan said.

Hazing is a crime in Pennsylvania, but it applies only to colleges, not high schools. Hogan said he would have considered charging other Conestoga football players with hazing had the charge been available to him.

A bill pending in the state Legislature would extend the anti-hazing statute to high schools and private sports leagues.

Conestoga is among the most highly ranked schools in Pennsylvania for academics.

Copyright 2016 The Associated Press. All rights reserved. This material may not be published, broadcast, rewritten or redistributed.
The Gayly - 3/4/2016 @ 12:38 p.m. CST