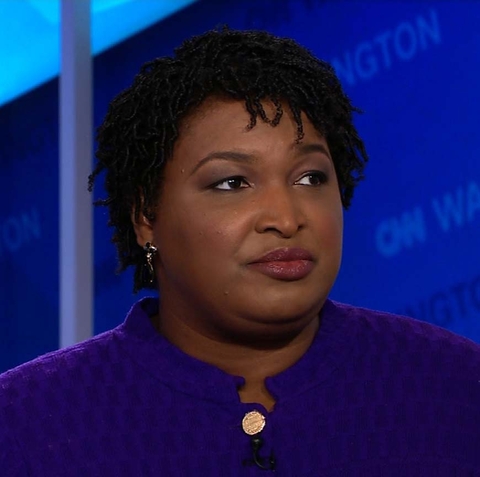 Former Democratic Georgia gubernatorial candidate Stacey Abrams said Sunday that she "trust(s) Joe Biden to make the best decision" when it comes to selecting a running mate to help him beat President Donald Trump in November.

Biden announced in March that if he won the Democratic nomination, he was committed to choosing a woman as a running mate for the 2020 election. Biden, throughout his presidential run, has mentioned a number of women as possible vice-presidential picks, including Abrams and former primary rivals California Sen. Kamala Harris, Minnesota Sen. Amy Klobuchar and Massachusetts Sen. Elizabeth Warren.

On Sunday, the former Georgia State legislator warned that, "for communities of color, because of this pandemic, there is a great deal of distrust," in government, adding: "I want to make one thing very clear -- Joe Biden enjoys the trust of communities of color, and he will take no one for granted. And I believe that he will make the right choice based on what he understands and what his team believes and recommends that he do."

On her own chances of making it onto the ticket in November, Abrams on Sunday told CNN, "My responsibility is to follow the process, if I'm included, and I trust that Joe Biden and his team are going to put together a process that will pick the best running mate for him, because fundamentally, it's his choice."

In an interview with Elle Magazine earlier this month, Abrams told the publication she'd make an "excellent" running mate, and has continued to tout her credentials in a series of media interviews in the subsequent weeks.

Abrams has previously argued it is crucial that the Democratic ticket include a woman of color.

The Georgia Democrat told CNN this month that it is an "important signal to have someone of color on the ticket" because for "communities of color, particularly for the black community, there has got to be a recognition that their needs are met."

On "The View" last month, Abrams was asked if "this is the year," with a historically diverse Democratic presidential field, that a woman or minority ends up being the presidential nominee.

"I believe so," she said. "For me, the conversation that led to me writing 'Lead from the Outside' is that we have to start evolving what the face of leadership looks like."

In an open letter to the Biden campaign Friday, 200 black women urged the former vice president to pick a black woman as his running mate, calling for "a ticket that reflects the diversity of America."

South Carolina Rep. Jim Clyburn, the third highest-ranking Democrat in the House of Representatives who endorsed Biden before his decisive win in the state, has also said he favors the former vice president picking a black woman.

This story has been updated to include additional background information.