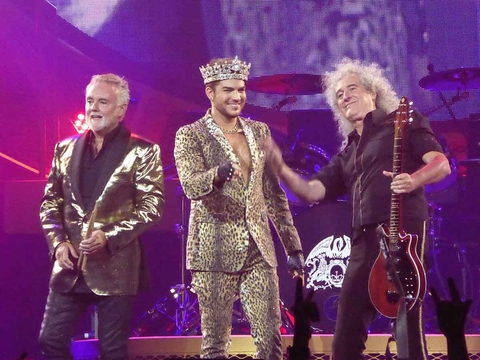 Queen will still rock you, with Adam Lambert singing lead.

The legendary band announced Monday they will hit the road for a 23-stop North American Rhapsody tour.

"The soaring success of Bohemian Rhapsody -- the Freddie Mercury/Queen movie that is set to become the biggest grossing music biopic of all time -- has proven that the public's love for Queen remains as strong as ever," a press release on the band's official site stated.

"Longtime fans and recent converts will be thrilled to discover then, that Queen -- original band members Brian May and Roger Taylor, teaming up once more with longtime frontman Adam Lambert on lead vocals -- will return to North America next year."

The biographical film stars Rami Malek as Mercury and opened in October.

Mercury died at the age of 45 in 1991 from AIDS related complications.

Lambert was a contestant during Season 8 of American Idol where he thrilled audiences with his rendition of some Queen classics.

The band appeared with Lambert during the show's 2009 finale. Lambert finished second to winner Kris Allen.

Lambert and the band went on to form Queen + Adam Lambert and began touring.

The new tour will kick off July 10 at Vancouver Rogers Arena in Canada and run through August.

"We have been designing a brand new visual spectacle that will reframe these iconic songs and we are excited to unveil it!," Lambert said in a statement.

Tickets go on sale to the general public Friday.