After harsh criticism, supporters of child drag queen fight back 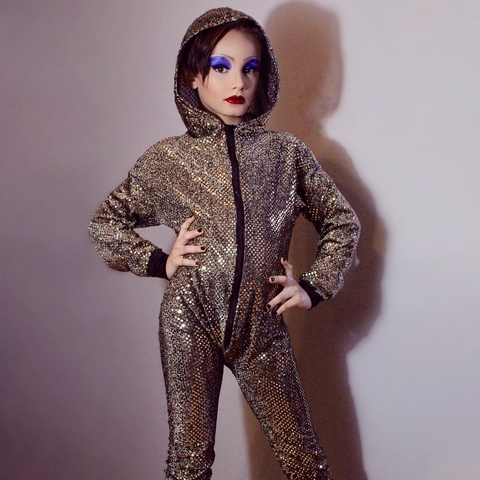 Designer Brandon Hilton and the family of a 9-year-old drag queen known as Queen Lactatia are defending photographs published on social media of Lactatia sporting a sequined outfit.

Hilton is the owner of House Of Mann, a Canadian fashion company that was started, according to the shop’s website, out of a desire for “boudoir couture.” The shop features drag costumes as well as items like lingerie and bondage apparel. Hilton has also built up following on social media as a performer and LGBTQ advocate.

Hilton said he had already been following Lactatia when his mom, Jessica Mélançon, reached out. Lactatia’s family had previously connected with Hilton about his involvement with Drag Queen Story Hour, a movement in which libraries bring in drag queens to read books to children in an effort to create space where children can interact with LGBTQ people.

“We were already so amazed by Lactatia,” he told HuffPost.

Because Hilton’s clothing line got its start in drag costume, the brand thought it would be “really cool” to get Lactatia in a drag costume for a shoot. “We were completely planning on making her something original, but she picked the sequin onesie off the website and loved it,” Hilton said. “So we made one in her size and sent it to her. Then her mom took photos of her in it.”

When the photos of Lactatia appeared on Instagram at the end of December, they initially received attention from users of 4Chan, an anonymous message-board site known for harboring those with far-right sympathies. From there, Hilton said the outrage spread to Twitter, where some have accused the designer of pedophilia and child abuse. The buzz around the shoot resulted in articles in right-wing outlets like The Daily Caller and Breitbart.

Hilton told HuffPost he has received numerous death threats, including a message alleging an anonymous Bitcoin account is taking out money “to find someone to hire to kill me.”

Hilton said the criticism has been driven in part by the fact that House of Mann sells adult items in the shop alongside its drag costumes. “Yes, we sell adult clothing, but we started as a drag queen store, and Lactatia is a drag queen.”

“House of Mann makes burlesque and drag costumes,” she explained to HuffPost. “They’re performance pieces. House of Mann sent Lactatia a full coverage, head-to-toe, sequined one-piece. Lactatia is a drag performer and also vogues, so that piece made sense. No, Lactatia is not going to be modeling the burlesque and fetish wear designs featured on his site, and the fact that we actually have to clarify that is a little ridiculous.”

“I’m trying to create a future where kids feel safe and accepted and free to be themselves,” Hilton said. “People are trying to make me a monster because I feel like people shouldn’t be bullied, shouldn’t grow up being put down just to become adults with insecurities and issues and suicidal tendencies because of the way they were treated as kids. I’m trying to curate a future where kids grow up and say, ‘If I’m gay, that’s okay. If I want to be a drag queen, that’s okay.’ Whoever you are, that’s okay.”