Are Pride events too political? 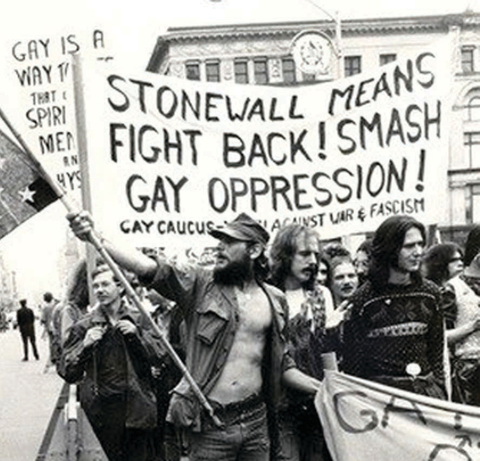 This year we celebrate the 50th anniversary of the Stonewall Riots. I doubt that in the early morning hours of June 28, 1969, any of the people at the Stonewall Inn were thinking of politics. But when a police raid descended on the bar, anger boiled over and the people the police were hauling out rioted – for six long nights.

We celebrate Pride month in June in homage to this early protest of discrimination and persecution against LGBTQ+ people. But in later years, we have often heard that Pride events are “too political.”

Consider what the ‘50s and ‘60s were like for our community. Being out was scarcely an option. If your employer discovered you were gay, you were likely to be fired. You couldn’t join the military. If your draft board rated you 4-F because you were openly gay, indicating that you were “not acceptable for service,” employers were unlikely to hire you – if you were unfit for military service, you were probably unfit to work for them.

Public opinion of homosexuality was uniformly negative, so negative that major polling organizations like Gallup didn’t even consider asking about whether “gay or lesbian relations between consenting adults should or should not be legal” until the later ‘70s. In 1979 only 43 percent of people thought it should be legal.

In short, being LGBTQ+ in the middle of the 20th century pretty much sucked.

But then came Stonewall.

We started having marches, demonstrations, sit-ins and more to draw attention to our plight and our demand for protection against discrimination in employment, housing and public accommodations. Of course, that generated opposition to LGBTQ+ rights.

But the good news is that the general trend, from the early ‘90s on, was a rise in acceptance. In 2018, 75 percent approved of LGBTQ+ rights, while only 23 percent opposed them.

We are gaining acceptance because of the political nature of coming out, Pride events and due to advocacy organizations like HRC and local LGBTQ+ advocacy groups. The essence of Pride events, LGBTQ+ rights demonstrations, marches on Washington and other efforts fighting to end discrimination and persecution, were, and are, inherently political.

But acceptance aside, Congress and state legislatures have been slow to grant us our rights. There is no national protection passed by Congress, and only 21 states plus the District of Columbia, Guam and Puerto Rico have laws protecting against sexual orientation and gender identity discrimination.

Most of our national rights protections have come from the courts. Which leads to an interesting observation by a constitutional law scholar named Paul Freund who said: “[t]he Court should never be influenced by the weather of the day, but inevitably, it will be influenced by the climate of the era.”

With rising acceptance being “the climate of the era,” the Supreme Court has issued a series of LGBTQ+ affirming decisions since the mid-‘90s. They were Romer v. Evans, striking down Colorado’s ban on gay and lesbian protection; Lawrence v. Texas¸ which overturned state sodomy laws, making homosexual sex relations legal; Windsor, which overturned the so-called “Defense of Marriage Act”; and finally, Obergefell, making marriage equality the law of the land.

We are not done yet. The Trump administration has assaulted LGBTQ+ rights, with a particular focus on the transgender community. There is a strongly conservative Supreme Court, and we don’t yet know how it will rule on cases affecting our rights. GOP controlled legislatures continue to churn out anti-LGBTQ+ laws.

So we must continue the struggle. Yes, Pride events are political! And they should remain that way!