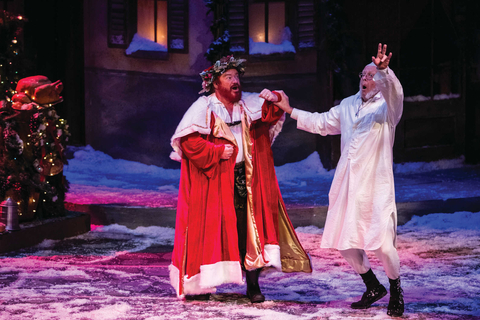 1 John Knippers (left) as The Spirit of Christmas Present and Karl Krause as Ebenezer Scrooge in American Theatre Company’s “A Christmas Carol.” Photo by Kenneth Jones.

American Theatre Company (ATC) brings its 40th presentation of a Tulsa favorite holiday family musical, A Christmas Carol, to the Tulsa PAC stage December 8-23.Written, composed, and adapted by ATC company members, Robert Odle and Richard Averill, the production premiered in 1976 and has been entertaining audiences ever since.

A Christmas Carol, written by Charles Dickens in 1843, tells a heartwarming story that offers hope through the tale of one lonely humbug who is given the rare chance to change his life and find his heart. It’s a story of generosity, family and good will.