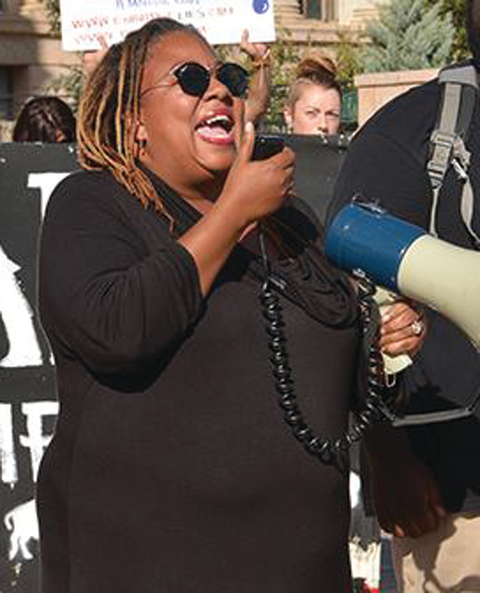 In honoring Harvey Milk, I have decided to carry his message of becoming the change you wish to see.

In Harvey Milk’s famous June 24, 1977 speech, You’ve Got to Have Hope, he explains that there must be political leaders from the gay community to represent and portray that community in a truthful manner. He says that it is not enough for minority communities, including the gay community, to be judged by its friends or allies.

So, I encourage you, the black LGBTQ, to run for office and don't get discouraged if you don’t get it on the first try. Run for city council, school board; hell, even the PTA (Parent Teacher Association). After you get your name out there and serve well then you can run for larger offices. There are so many myths about black LGBTQ people that only you can dispel. You are in a unique position because you can represent both the LGBTQ and the black perspective.

Our very own Rev. Sheri Amore Dickerson, Executive Director of Black Lives Matter (BLM) OKC, recently ran for OKC City Council for Ward 7. Although she did not get enough votes in the last election I have so much faith that she will the next time around. In our recent conversation, she expressed her desire to run again. Sheri has been an advocate and leader in our LGBTQ community for over a decade.

Very shortly after creating Black Lives Matter OKC in the summer of 2016, BLM OKC put together a peaceful protest to bring light and solutions to the police brutality issues involving unarmed African Americans. The downtown protest attracted over 5,000 participants of all races, genders, sexualities and socioeconomic backgrounds.

If you are hesitant on running, don’t be, because you have many organizations willing to help you with the process. Our community must depend upon our partnerships in order to achieve our goals of equality. Oklahoma has become more progressive in just a few years. People are awake and becoming very vocal and aware of how they can help our state become more inclusive. We have more allies than ever. We are supported.

As Gandhi says, “Be the change that you wish to see in the world.”