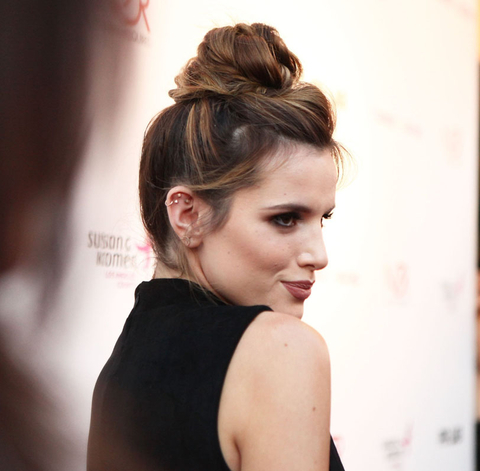 Bella Thorne revealed years ago that she was bisexual but now she has further defined her sexuality. Photo by Matt Winkelmeyer/Getty Images.

Bella Thorne revealed via social media years ago that she was bisexual, but now the former Disney star has further defined her sexuality.

In an interview with ABC's Good Morning America to promote her new book, Life of a Wannabe Mogul: Mental Disarray, Thorne talked about no longer identifying as bisexual.

"I'm actually a pansexual, and I didn't know that," Thorne said.

A person who is pansexual is attracted to those of any gender. The dictionary defines the term as "not limited in sexual choice with regard to biological sex, gender, or gender identity."

Thorne is not the first celebrity to go public as pansexual.

Among others, singer and actress Miley Cyrus did so in 2016 as well as Orange is the New Black star Asia Kate Dillon (who also identifies as non-binary and uses the pronouns "they/their") and teen trans-activist and reality star Jazz Jennings. Janelle Monáe revealed she was pansexual in a 2018 interview with Rolling Stone.

Thorne, who recently was in the news for tweeting nude photos of herself after a hacker threatened to do so, has been publicly linked over the years in several high-profile relationships with both men and women, including You Tube star Tana Mongeau.

According to People magazine, Thorne is currently involved in a long-distance relationship with Italian singer Benjamin Mascolo.