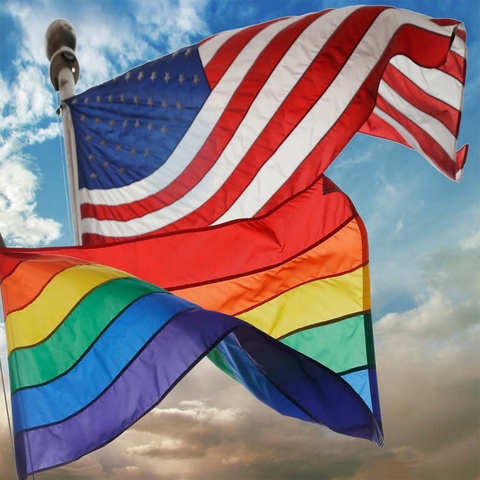 California has joined at least three other states that will be waving the rainbow flag over state Capitol buildings this month for the first time ever.

The flag was raised Monday morning and will be flown on the Capitol's main flagpole in Sacramento through July 1, at the request of the governor, a press release from his office said.

"In California, we celebrate and support our lesbian, gay, bisexual, transgender and queer community's right to live out loud -- during Pride month and every month," California Gov. Gavin Newsom said in the release. "By flying the pride flag over the State Capitol, we send a clear message that California is welcoming and inclusive to all, regardless of how you identify or who you love."

The flag raising follows "similar historical firsts in Colorado and Wisconsin," the release says, adding it "comes at a time when the federal government has told US embassies they can't fly Pride flags.

The rainbow flag has become a universal symbol of hope for LGBTQ+ people around the world. It was first flown in San Francisco's United Nations Plaza for Gay Pride Day, on June 25, 1978.

Earlier this month, State Department officials told CNN US embassies were denied permission by the Trump administration to fly the rainbow flag in honor of the LGBTQ+ Pride Month.

"At a time when the Trump Administration is forbidding U.S. embassies and consulates around the world from raising pride flags, we are sending the message that we acknowledge and respect LGBTQ+ people, and they have a home here in California," California Assemblymember Todd Gloria, Vice Chair of the California Legislative LGBTQ+ Caucus, said in a statement.

"I am proud Governor Newsom is continuing to keep California as a rainbow beacon of hope for the rest of the nation," Gloria said.

It may be the first time the rainbow flag is flying over the California Capitol, but it is no stranger to the building.

"The flag has previously been hung over balconies both inside and outside of the building and the Capitol dome was illuminated in rainbow colors in June 2015 when the U.S. Supreme Court decided that the Fourteenth Amendment requires all states to grant same-sex marriages and recognize same-sex marriages granted in other states," the release said.

Earlier this month, the rainbow flag also flew over New York's state Capitol for the first time ever.

The flag was raised in conjunction with the opening of a Pride Month exhibit, "Equality Will Never Be Silent," set up in the Capitol building in Albany.