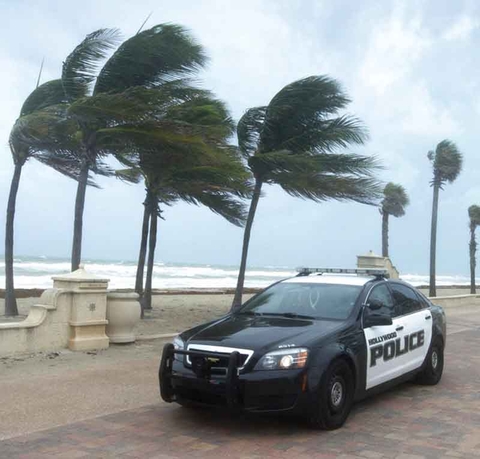 A police car patrols the beach in anticipation for Hurricane Irma, in Hollywood, Fla. Paul Chiasson, The Canadian Press via AP.

Naples, Fla. (AP) — Hurricane Irma's leading edges whipped palm trees and kicked up the surf as the storm spun toward Florida with 125 mph winds Saturday on a projected new track that could put Tampa — not Miami — in the crosshairs.

Tampa has not taken a direct hit from a major hurricane in nearly a century.

The westward swing in the overnight forecast caught many people off guard along Florida's Gulf coast and triggered an abrupt shift in the storm preparations. A major round of evacuations was ordered in the Tampa area, and shelters there soon began filling up.

The window was closing fast for anyone wanting to escape before the arrival of the fearsome storm Sunday morning. Irma — at one time the most powerful hurricane ever recorded in the open Atlantic — left more than 20 people dead in its wake across the Caribbean.

"You need to leave — not tonight, not in an hour, right now," Gov. Rick Scott warned residents in Florida's evacuation zones, which encompassed a staggering 6.4 million people, or more than 1 in 4 people in the state. 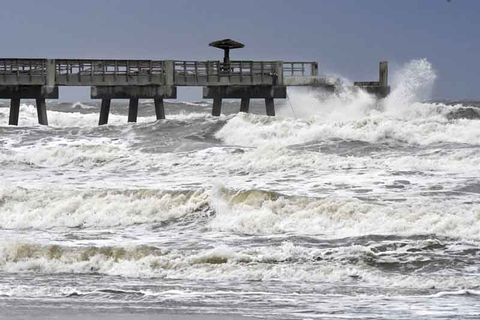 For days, the forecast had made it look as if the Miami metropolitan area of 6 million people on Florida's Atlantic coast could get hit head-on with the catastrophic and long-dreaded Big One.

But that soon changed. Meteorologists predicted Irma's center would blow ashore Sunday morning in the perilously low-lying Florida Keys, then hit southwestern Florida and move north during the day, plowing into the Tampa Bay area by Monday morning.

The Miami metro area could still get pounded with life-threatening hurricane winds.

Tampa has not been struck by a major hurricane since 1921, when its population was about 10,000, National Hurricane Center spokesman Dennis Feltgen said. Now the area has around 3 million people.

By late morning Saturday, however, few businesses in St. Petersburg and its barrier islands had put plywood or hurricane shutters on their windows, and some locals grumbled about the change in the forecast.

"For five days, we were told it was going to be on the east coast, and then 24 hours before it hits, we're now told it's coming up the west coast," said Jeff Beerbohm, a 52-year-old entrepreneur in St. Petersburg. "As usual, the weatherman, I don't know why they're paid."

Irma's winds were down considerably from its peak of 185 mph (300 kph) earlier in the week. But the hurricane was expected to pick up strength again before hitting the Sunshine State.

Nearly the entire Florida coastline remained under hurricane watches and warnings, and leery residents watched a projected track that could still shift to spare, or savage, parts of the state. 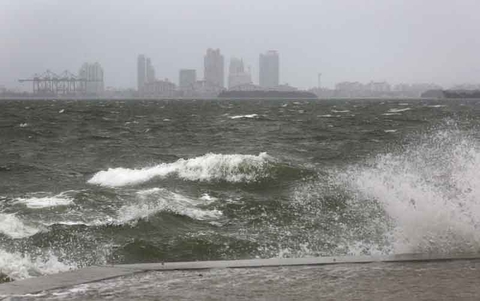 Winds and sea are whipped up off of the Rickenbacker Causeway in Miami. Mike Stocker, South Florida Sun-Sentinel via AP.

Forecasters warned of storm surge as high as 15 feet along a swath of southwest Florida and beyond.

"This is going to sneak up on people," said Jamie Rhome, head of the hurricane center's storm surge unit.

On Saturday morning, the state was already beginning to feel Irma's effects. Nearly 45,000 people had lost power, mostly in and around Miami and Fort Lauderdale, as the wind began gusting.

Major tourist attractions, including Walt Disney World, Universal Studios and Sea World, all prepared to close Saturday. The Miami and Fort Lauderdale airports shut down, and those in Orlando and Tampa planned to do the same later in the day.

Given its mammoth size and strength and its projected course, it could prove one of the most devastating hurricanes ever to hit Florida and inflict damage on a scale not seen here in 25 years.