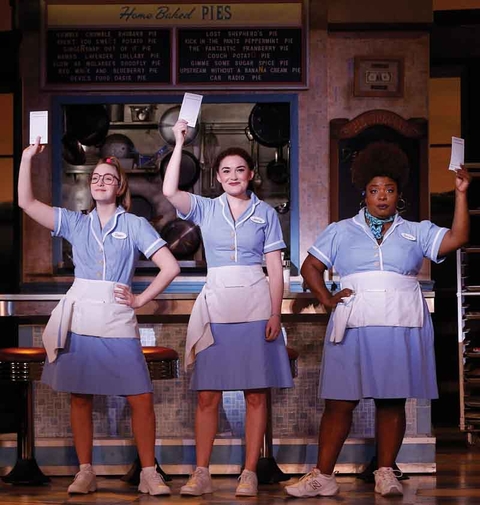 A scene from "Waitress". Photo provided.

Waitress will make its Tulsa debut at the Tulsa Performing Arts Center (TPAC). This limited eight-performance engagement is brought to you by Celebrity Attractions and will be performed April 16-21.

Inspired by Adrienne Shelly’s beloved film, Waitress tells the story of Jenna - a waitress and expert pie maker, Jenna dreams of a way out of her small town and loveless marriage. A baking contest in a nearby county and the town’s new doctor may offer her a chance at a fresh start, while her fellow waitresses offer their own recipes for happiness. But Jenna must summon the strength and courage to rebuild her own life.

“It’s an empowering musical of the highest order!” raves the Chicago Tribune. “Waitress is a little slice of heaven!” says Entertainment Weekly and “a monumental contribution to Broadway!” according to Marie Claire.  Don’t miss this uplifting musical celebrating friendship, motherhood, and the magic of a well-made pie.

Presented by Celebrity Attractions, Waitress comes to the Tulsa Performing Arts Center for eight performances April 16-21. The performance schedule is Tuesday, Wednesday and Thursday at 7:30 p.m., Friday at 8 p.m., Saturday at 2 p.m. and 8 p.m., and Sunday at 1 p.m. and 6:30 p.m.

Waitress is part of Celebrity Attractions’ 35th Anniversary 2018-2019 Broadway Season which also includes the joyous classic Fiddler on the Roof. The season concludes with Hamilton, making its Tulsa debut.