Chasten Buttigieg honors his husband as candidate exits race, "Pete got me to believe in myself again" 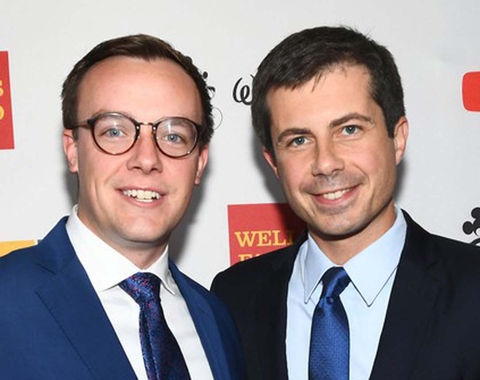 Right before Pete Buttigieg ended his presidential campaign Sunday night, his husband, Chasten, told the story of how it began.

"About a year and a half ago, my husband came home from work and told me, well, he asked me, 'What do you think about running for president?' And I laughed. Not at him but at life," a visibly emotional Chasten Buttigieg told a group of supporters gathered in South Bend, Indiana. "Because life gave me some interesting experiences on my way to find Pete."

He continued, "After falling in love with Pete, Pete got me to believe in myself again. And I told Pete to run because I knew there were other kids sitting out there in this country who needed to believe in themselves too."

Chasten Buttigieg is often private about how he came out, but he recalled in an interview with The Washington Post in 2019 how his family reacted poorly to him informing them he was gay, including one of his brothers saying, "No brother of mine." Buttigieg said that he felt like he couldn't stay at his home after the experience and slept both at a few friends' houses and in his car in the parking lot of the community college he attended.

He eventually made up with his family and his mother asked him to come back home. And when the Buttigiegs were married, Chasten said his parents walked him down the aisle.

Former South Bend, Indiana, Mayor Pete Buttigieg exited the presidential race Sunday, ending a historic candidacy that vaulted him from relative obscurity to become one of the most prominent gay political figures in the United States. His rise to become a serious contender for the Democratic presidential nomination challenged pre-conceived notions of what was possible for gay politicians in America.

Reflecting on the unlikely campaign in an emotional speech before his husband took the stage, Chasten Buttigieg said, "It has been an honor and a privilege to share my husband with the rest of this country."

"This campaign was built on an idea of hope, an idea of inclusion, an idea of addition rather than subtraction, about bringing people together, about looking your neighbor in the eye and saying maybe we don't agree on everything, but let's agree on this," he said.

He added: "We've got one shot and that's what we did. We went out there with that one shot and we gave it everything we had because it is time for every single person in this country to look to the White House and know that that institution stands for them, that they belong in this country."

Chasten Buttigieg was a visible surrogate for his husband throughout the campaign whose sense of humor and revealing honesty made him popular on social media.

Pete Buttigieg regularly mentioned Chasten on the trail. At the seminal moment of his campaign, a CNN town hall in March, Buttigieg used his marriage to explain how important politics was to him.

"That intimate thing in our lives," he said of his marriage, "exists by the grace of a single vote on the US Supreme Court."

Jill Biden tweeted a send-off to Chasten Buttigieg on Sunday night, writing, "my fellow educator, thank you for your service to our country and all you've done for the man you love, ⁦‪@PeteButtigieg⁩. You made us all believe in ourselves a little more and our country is better for it."

Chasten Buttigieg ended his remarks Sunday by telling the audience that "the same person you saw at a town hall is the same person that comes home to me every night."

"For those of you who know me, you know I'm usually not short with words. But tonight I will be. It's an honor to come home and to bring home the person I love so dearly," he said.