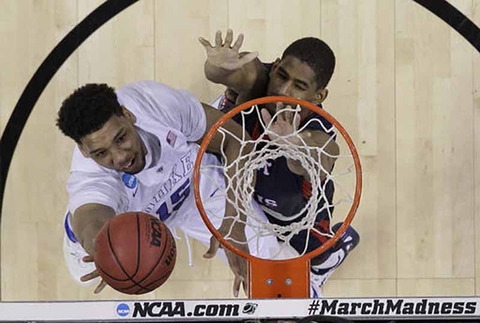 President Mark Emmert says it's up to the Atlantic Coast Conference to pull events out of North Carolina because of HB2. Photo by Gerald Herbert.

Charlotte, NC — The Division II Central Intercollegiate Athletic Association says it will move eight of its 10 conference championships set for North Carolina — but not its two basketball tournaments — because of a state law that restricts the rights of LGBT people.

In a statement Friday, the country's oldest African-American sports conference said its men's and women's basketball tournaments — two of its marquee events — will remain in Charlotte because "relocation would not be in the best interest" of members and players.

The league did not cite House Bill 2 by name but said moving those championships shows it opposes laws that prevent communities from protecting players and fans.

The NBA moved its All-Star game from Charlotte to New Orleans earlier this year, and this month the NCAA and Atlantic Coast Conference both pulled championship events from the state because of the law, signed into law earlier this year by Republican Gov. Pat McCrory.

It requires transgender people to use restrooms at schools and government buildings corresponding to the sex on their birth certificates. It also excludes gender identity and sexual orientation from local and statewide anti-discrimination protections.

The CIAA's announcement came a day after the ACC announced it would play its football title game in Orlando, Florida. That game had been held in Charlotte since 2010.

The CIAA has held its basketball tournaments in Charlotte since 2006 and moved its headquarters there from Hampton, Virginia, in the past year. Seven of the 12 members are based in North Carolina, with the others in Virginia, Maryland and Pennsylvania.