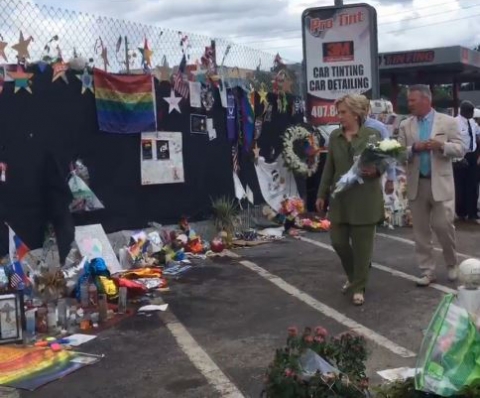 She placed a bouquet of flowers outside of the nightclub, alongside thousands of other mementos of victims.

Clinton was joined by Mayor Buddy Dyer and U.S. Sen. Bill Nelson. According to the Orlando Sentinel, Clinton met with the first responders of the Orlando shooting by Omar Mateen outside of Pulse. The Sentinel says she and Dyer then embraced.

Earlier today, Clinton met with Orlando community leaders, LGBT activists and religious leaders, pledging to “promote the kinds of changes that will prevent this from happening to other people, other families and other communities.”

She said, “I’m really here to listen to what your experiences have been,” noting that lesbian, gay, bisexual and transgender Americans are at high risk for hate crimes.

“We need to acknowledge and be very clear who this attack targeted. The Latinx LGBT community by any measure was the community that was the most severely impacted by this terrible attack.”

She added, “It is still dangerous to be LGBT in America.”

Shooter Mateen’s father previously said that the motive behind the attack spurred from witnessing a kiss between two men.