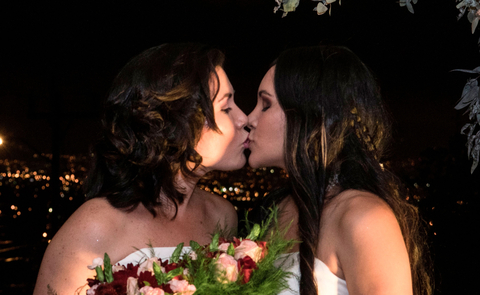 The country on Tuesday became the first in Central America to legally recognize same-sex marriage.

"Today we celebrate liberty, equality and our democratic institutions. May empathy and love be the compass that guide us forward and allow us to move forward and build a country that has room for everyone."

The move to marriage equality follows an August 2018 ruling by the country's Constitutional Court, which ruled that laws preventing same-sex marriage were unconstitutional.

The court gave the legislature 18 months to enact marriage equality, or have the ruling recognizing same-sex marriages automatically go into effect once the deadline expired.

Costa Rica's decision also follows an opinion issued by the Inter-American Court of Human Rights in January 2018. The Central American country had asked the court to determine whether it was obligated to extend property rights to same-sex couples.

Alexandra Quiros and Dunia Araya were among the lovebirds who tied the knot on Tuesday, holding a marriage ceremony in Heredia.

"Costa Rica is celebrating today: marriage equality has become a reality in the country - the first one in Central America!" the International Lesbian, Gay, Bisexual, Trans and Intersex Association (ILGA World) said. "We rejoice with you: congratulations to all those who worked so hard to make it happen!"

The Human Rights Campaign also cheered the decision, though it added that more work needed to be done to achieve marriage equality around the world.

"Today, Costa Rica has made history, bringing marriage equality to Central America for the first time," HRC President Alphonso David said in a statement. "Costa Rica's LGBTQ community has worked tirelessly for years to make today a reality. This victory is theirs, and it inspires the entire global LGBTQ community to continue fighting to move equality forward."