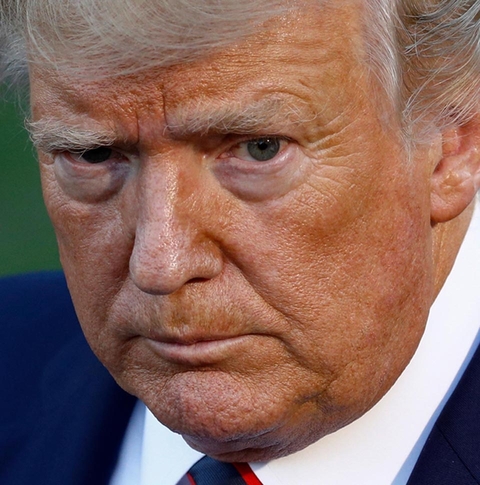 Have Trump's comments only deepened our divisions? AP photo via CNN.

Fires are burning in cities across America, with storefronts smashed amid clashes between cops and protesters against police violence. It comes days after the coronavirus death toll in our country passed the grim milestone of 100,000, after a month in which 40 million people on went on to unemployment rolls -- exceeding the depths of the Great Depression.

With the country in crisis after a month from hell, President Trump's public schedule for this last day of May is blank. But when he's not MIA, the President's comments have only deepened our divisions, with tweets like "when the looting starts, the shooting starts", coming one day after he retweeted an account saying "the only good Democrat is a dead Democrat."

President Trump has sowed the seeds of conflict and now we are all reaping the whirlwind of chaos. His inability to empathize with others, his instinct to play white identity politics, his essential disinterest in uniting the nation, have brought us to this breaking point. But We The People need to be bigger than the President and hold ourselves to a higher standard in pursuit of justice and peace. Because when righteous protests turn violent it is deeply self-defeating.

There may be some on team Trump who look at the riots and see electoral opportunity, the desire for law and order delivered from a decidedly un-PC president. After all, there are studies that quantify how riots make a country more conservative. We know for sure that America's enemies see advantage in stirring up conflict along racial lines -- most notably Russia, who President Trump just unilaterally invited to the next G-7 meeting In March, the New York Times reported that "The Russian government has stepped up efforts to inflame racial tensions in the United States as part of its bid to influence November's presidential election, including trying to incite violence by white supremacist groups and to stoke anger among African Americans."This is a replay of what Russia did to help elect Donald Trump in 2016. The new chair of the Senate Intelligence Committee, Marco Rubio, tweeted that at least three foreign adversaries were stoking violence via social media.

We need to be clear-eyed when confronting the politics of fear, whether the source is overseas or here at home. There are folks who romanticize riots, at least when the destruction happens to someone else's property. But fighting fire with fire will only burn the whole house down. Or, as the rapper Killer Mike said in an emotional press conference with the Mayor of Atlanta: "it is your duty not to burn your own house down for anger with an enemy."

Few living Americans have more moral authority when it comes to confronting the forces of racial oppression than Rep. John Lewis, who was almost killed by Alabama troopers while peacefully protesting on the Edmund Pettus Bridge 55 years ago. On Saturday, he again reminded us of the discipline that is required to ultimately triumph over injustice, stating: "I know your pain, your rage, your sense of despair and hopelessness. Justice has, indeed, been denied for far too long. Rioting, looting, and burning is not the way. Organize. Demonstrate. Sit-in. Stand-up. Vote. Be constructive, not destructive."

Every word of this is true. We must confront the deep legacy of bigotry that leads too many black and brown and immigrant lives to be treated with callous disregard and sometimes become the victims of pure hate. But the answer does not lie in demonizing all police officers or indiscriminately destroying property. That will only spur a backlash and lead some to see moral equivalence between the two sides in the larger struggle between right and wrong. The riots in the late 1960s only succeeded in burning out inner cities and electing Richard Nixon on the back of his Southern strategy.

We need to learn the lessons of history -- both the legacy of systemic racism and the backlash against social chaos that benefits people who practice the politics of fear and division under the name of law and order. A relatively small number of people acting in bad faith can derail a movement, delay justice and divide a nation. With a presidential election now just five months away we can't let the forces of chaos and conflict win again. Because we desperately need to reunite the United States of America.