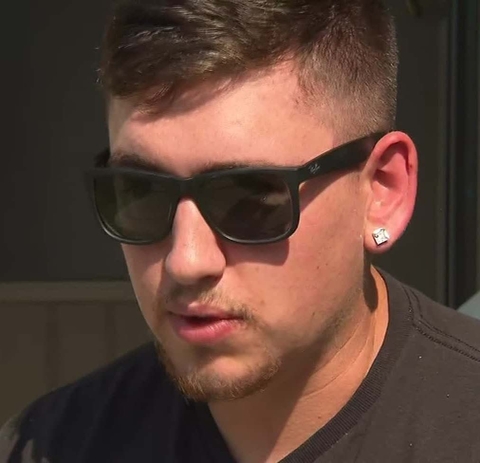 In high school, the shooter had this student on his "hit list." CNN photo.

The most recent tweet on the @iamthespookster account was on August 3, the day of the shooting, when he retweeted a post saying, "Millenials have a message for the Joe Biden generation: hurry up and die." He also retweeted messages supporting Sens. Bernie Sanders and Elizabeth Warren.

Police are still trying to determine what motivated Betts to kill nine people early Sunday morning in a popular nightlife district in downtown Dayton. He was killed by police officers on patrol nearby 30 seconds after he opened fire.

In the hours before the Dayton shooting, the Twitter account "liked" several tweets about a shooting in El Paso, Texas, that left 22 dead, including one supporting gun control and others that called the El Paso shooting suspect a "terrorist," and a "white supremacist."

The account also retweeted posts against ICE agents, including one that said, "these people are monsters," and multiple posts condemning police, and supporting Antifa protesters, who often use violent tactics. There were also many tweets of selfies, photos with a friend and ordinary memes and nonpolitical content.

The account is no longer active, but Twitter would not confirm to CNN whether it had removed the account, only saying in a statement, "We're proactively removing content that violates our policies and will be engaged with law enforcement, as appropriate."

As a high school student, the gunman had a "hit list" of classmates he wanted to "kill" or "rape," said former students who said they were told by school officials they were on the list.

Spencer Brickler said a counselor at Bellbrook High School in Ohio told him he and his sister were on Connor Betts' hit list.

Brickler recalled sitting on a school bus about nine years ago when he saw Betts getting escorted away by officers investigating the threats.

"He was kind of dark and depressive in high school," said Brickler, who was a freshman when the school counselor told him about the hit list. He said he had no idea what prompted Betts, then a sophomore, to put him or his sister on the list.

But the writings did not indicate any racial or political motive, sources said.

A former high school classmate of the shooter said he and another classmate called police years ago to warn them that Betts had a "kill list."

David Partridge said a friend had showed him text messages she received from Betts referencing his "kill list," and that one of Partridge's relatives was on it. Partridge told his friend he was going to call police and said he convinced her to do the same.

"I said, 'Hey, I don't want to drag you into this, but we have to go to the police. This guy could go to the school, he could kill people, he could hurt my family, he could hurt you,'" Partridge recalled telling his friend.

In an interview with CNN, Partridge said he believed the incident occurred about 10 years ago, when he was a sophomore at Bellbrook High School. He said police took his friend's cell phone as part of their investigation.

After calling police, Partridge said he confronted Betts over the phone.

"(I) said, 'Hey ... I hear there is this hit list, and you've got my family on there. What is this about? Why have you written these things?' He was really avoidant about me confronting him about this, denying it, and not angry, but just shocked that someone had gone up to him and said, 'What is this, Connor?'" Partridge recalled.

Partridge said he witnessed Betts being detained by police at school the following day.

CNN has repeatedly requested records pertaining to Betts from the Bellbrook-Sugarcreek school district.

Bellbrook-Sugarcreek Schools Superintendent Douglas A. Cozad confirmed that Betts was a student who graduated in 2013. In a statement, the superintendent said they need to get approval from their legal counsel or a court before releasing records. Although Betts is deceased, Ohio law offers broader protections for students' records and "we have no official documentation of the student's death at this time," the statement said.

CNN requested records from the Sugarcreek Police Department, and they responded with a file on Betts that showed "sealed records" had been expunged.

Another former high school classmate, who asked not to be identified out of concerns for his privacy, also recalled being summoned to a school administrator's office and being told he was "number one" on the list of students Betts wanted to kill.

Another source, who also asked not to be named for privacy reasons, told CNN that Betts sent messages about the list to one of his classmates, who told her mother. Her mother then notified the police, who came to the school and interviewed people on the list individually in the school's office.

"Personally, it freaked me out," said the classmate who was told she was on the list. "I started having panic attacks in the school building."

A fourth person, who also asked not to be named for privacy reasons, said, "All I know is there was a list of violent actions and a list of names including mine."

She said some of the names were female students who, like her, turned him down for dates. She said Betts often simulated shooting other students and threatened to kill himself and others on several occasions.

"He loved to look at you and pretend to shoot with guns, guns with his hands," she said.

Another former classmate, who was not on the list, said he met Betts through a "friend of a friend." He said whenever they hung out, Betts would talk about violence and use harsh language about women, like calling them "sluts."

Betts' former classmates told CNN that they recalled Betts being removed from the school for at least a year, but that he later returned to Bellbrook High.

The shooter later attended Sinclair Community College in Dayton but was not enrolled in the summer term, the school's president Steve Johnson said.

Not everyone remembered Betts as a troubled teen.

Betts' friend Brad Howard described the gunman as "a really nice kid" who was quiet and kept to himself.

Howard said he grew up with Betts and knew him for over 20 years.

He said news of Betts' final act was "a kick in the teeth" to the community.

Betts belonged to a "pornogrind band"

Betts was in a band called the Menstrual Munchies, recalled Zach Walton, a musician who booked the band for two shows in 2018.

Walton described those shows as an all-day event that featured bands, including those who perform in a genre Walton called "pornogrind," in Missouri.

Pornogrind is an offshoot of goregrind and grindcore music; the lyrics discuss -- oftentimes in extremely graphic and violent ways -- pornographic and sexual themes, Walton said.

CNN reached out to some people who describe themselves as fans of the genre. For some of those listeners, the music is described as an "outlet," or a "coping mechanism" that they say helps them channel anger and stress.