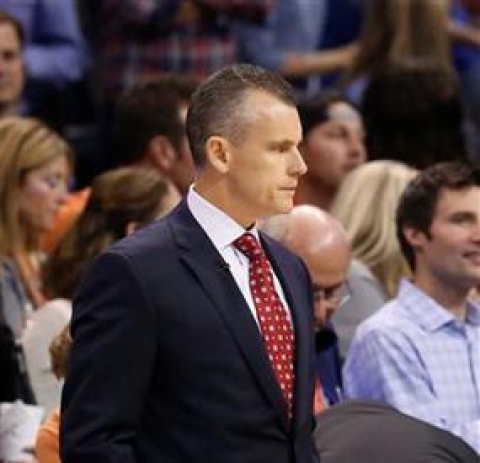 Russell Westbrook had 33 points and 10 assists as the Oklahoma City Thunder overcame a seven-point deficit in the fourth quarter to beat the San Antonio Spurs 112-106 on Wednesday night.

"I was very pleased that our guys just kept their composure," Donovan said. "They kept battling, they kept fighting, and I think everyone knew it was going to be a game that was going to come down that way."

Kevin Durant missed most of last season with a broken right foot and scored 22 points in his first regular-season game since February.

Donovan won two national titles as University of Florida coach. Durant was glad to help him get his first professional win.

"I know it's one of many games, but to get him his first 'W,' especially at home on a big stage against a big-time team felt good," Durant said. "He was calm all night, and that kind of rubbed off on us."

Durant made just 6 of 19 field goals, but hit two critical free throws with 11.5 seconds remaining to put the Thunder in control.

Enes Kanter had 15 points and 16 rebounds off the bench for the Thunder.

Kawhi Leonard scored a career-high 32 points and grabbed eight rebounds for the Spurs. LaMarcus Aldridge had 11 points and five rebounds in his debut with San Antonio after nine years with the Portland Trail Blazers.

Westbrook found Durant for a 3-pointer with just more than four minutes remaining to put the Thunder up 99-97. It was Westbrook's 10th assist, and it helped Durant feel normal again.

"It felt good, man," he said. "I had some in-and-out looks tonight. My looks felt great, and to hit that one was big for our team."

After Parker put the Spurs up two, back-to-back baskets by Dion Waiters put the Thunder ahead by two. A 3-pointer by Westbrook with 54.2 seconds to play put Oklahoma City up by five.

Leonard scored, was fouled and made the free throw with 42 seconds left to cutOklahoma City's lead to two, and Westbrook missed a jumper to give San Antonio a chance to tie or win.

Danny Green's wild, off-balance 3-pointer was blocked by Steven Adams, and theThunder gained possession. Durant made the free throws to put the game out of reach.

"We made some mistakes discipline-wise, and I thought they were sharper in that good run," Popovich said. "A couple of defensive mistakes, a couple of offensive plays where we were impatient. We just needed to work together a little bit longer."

Thunder: Oklahoma's lineup of Durant, Westbrook, Adams, Serge Ibaka and Andre Roberson started together for the first time since Feb. 8. ... Westbrook scored 12 points in the first quarter and 19 in the first half. ... Westbrook, who averaged 7.3 rebounds per game last year, didn't get his first board until the final minute of the third quarter.

Substitution: San Antonio's Ginobili was not in the game for the sequence that ended with Green's errant shot.

Stat lines: Ibaka, who missed the final month of last season after knee surgery, finished with 10 points and five rebounds. He made 4 of 9 shots.

Quote of the night: Popovich, on Leonard: "He's done that the whole preseason, and he's kind of morphed into that through his career. He's a confident player now and has worked on his game diligently and really it's the first year he's been whole from the very beginning. He wasn't hurt during the summertime. He wasn't hurt in preseason. Every year so far, that's been his situation. He's arrived."

Up next: Oklahoma City plays at Orlando on Friday.