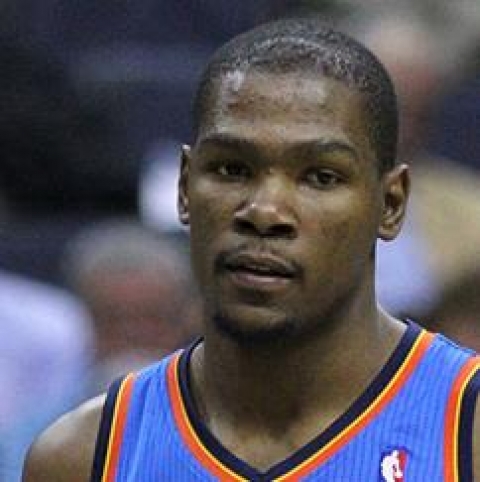 "I never want to live in fear," Kevin Durant said. "I love the game so much, so if anything were to happen again, I'd have to live with it." (Photo by Keith Allison/CC ASA 2.0)

Oklahoma City (AP) — The Thunder have all the pieces in place to contend for an NBA championship.

That is, as long as they stay healthy.

He's back, and going full speed.

"I never want to live in fear," he said. "I love the game so much, so if anything were to happen again, I'd have to live with it. I think if I would have went out there with doubt in my mind, something would happen. I was always taught, no matter what, if I'm on the court, I'm all right."

Even without Durant, the Thunder remained in the postseason hunt last season until a knee injury sidelined defensive stopper Serge Ibaka for the final month. The Thunder missed the playoffs, and coach Scott Brooks was fired.

There may have been a silver lining. As Durant recovered, Russell Westbrook won the scoring title, had his best defensive season and solidified his role as a team leader. Now, everyone is healthy, and the team has an additional piece. High-scoring center Enes Kanter signed a long-term deal in the offseason after getting traded to the Thunder in February.

New coach Billy Donovan, who won two national titles at the University of Florida, will be expected to get the most out of the stacked roster. The pressure will be on immediately because Durant is set to become a free agent after the season, and an NBA title might entice him to stick around. If he leaves, the dominoes could fall and one of the league's top cores the past decade could break up, with Westbrook becoming a free agent the following year.

Here are some things to watch this season:

Durant's Health: Durant had three surgeries on his right foot last season, including a bone graft procedure that ended his comeback bid. Even with lingering problems, he averaged 25.4 points per game last season and shot 51 percent from the field. He has looked good this preseason, often driving strong to the hoop without hesitation. Durant has operated as a point guard at times in the preseason, an indicator of Donovan's confidence in Durant's foot.

Kanter's defense: Kanter averaged 18.7 points and 11 rebounds after joining theThunder at midseason last year, but Brooks often said the 6-foot-11 Turkish star needed to improve as a defender. Kanter acknowledges that he needs to get better in that area. It's unclear if Kanter will start because Steven Adams was a much better defender last year. Who starts might depend on what has improved most since last season — Adams' offense or Kanter's defense.

Westbrook: The electric point guard emerged as one of the league's best players, averaging 28.1 points, 8.6 assists and 7.3 rebounds last season. He had 11 triple doubles and was the All-Star MVP. Now, he'll have to go back to deferring to Durant at times. He said adjusting to having Durant back won't be a problem because they are heading into their eighth year of playing together. While Westbrook was exceptional last year, it will be worth seeing if he makes fewer mistakes in Donovan's more structured system, and if his 3-point shot has improved from last year's 29.9-percent output.

Shooting guard: Andre Roberson has drawn the ire of Thunder fans because he hasn't scored much and hasn't hit open jumpers. Brooks was loyal to him because he's a shutdown defender and an excellent rebounding guard. Donovan has started Roberson in the preseason. Anthony Morrow is the opposite — a dead-eye shooter who struggles to defend. Morrow might have a better chance to start with a new coach, but they likely will play similar minutes either way.

Coaching staff: Donovan has quite a challenge in dealing with so many elite players, but he has plenty of veteran help on the sideline in Maurice Cheeks and Monty Williams. Cheeks has been head coach of the Portland Trail Blazers, Philadelphia 76ers and Detroit Pistons. Williams coached the New Orleans Pelicans to the playoffs last season.