Extracts of the opinion, and brilliant dissent, in Sixth Circuit marriage ruling 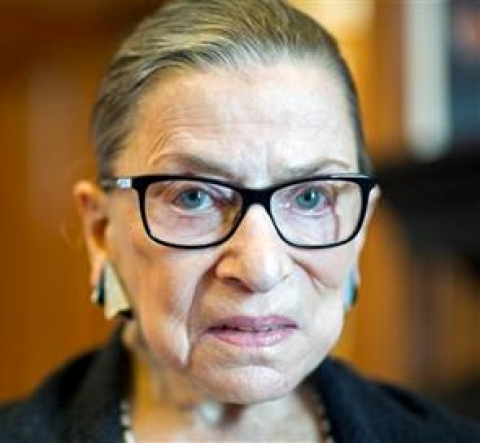 Supreme Court Justice Ruth Bader Ginsburg warned in a speech this summer that a Sixth Circuit opinion at odds with other Circuit Courts would result in the Supreme Court taking up the issue of marriage equality. (AP Photo/Cliff Owen, File)

The Sixth Circuit Court decision today in six marriage equality cases from Michigan, Ohio, Kentucky and Tennessee, almost certainly sets the stage for the United States Supreme Court to take up the issue of gay marriage. The court avoided having to do this on October 6, when it refused to hear appeals from three Circuit Courts, all of which upheld the right of citizens to have same-sex marriage.

The Sixth Circuit’s ruling upheld the right of states to make laws regulating marriage, and said the issue should be referred to the people to resolve, rather than to the courts. Circuit Judge Jeffrey Sutton, in the majority opinion, referred to “a definition of marriage that until  recently was universally followed going back to the earliest days of human history. That is a  difficult timeline to criticize as unworthy of further debate and voting.” This is an argument often posed by gay marriage opponents, and up to this point refuted by four other Circuit Courts.

Judge Sutton continued, “When the courts do not  let the people resolve new social issues like this one, they perpetuate the idea that the heroes in  these change events are judges and lawyers.”

Sutton then ignores the stark discrimination experienced at the hands of voters in dozens of states since the early 2000’s, when voters enshrined anti-gay discrimination in their states’ laws and often in their constitutions. Sutton said, “Better in this instance, we think, to allow change  through the customary political processes, in which the people, gay and straight alike, become  the heroes of their own stories by meeting each other not as adversaries in a court system but as  fellow citizens seeking to resolve a new social issue in a fair-minded way.”

Circuit Judge Martha Craig Daughtrey, dissented from the opinion. Judge Daughtrey said, in her written dissent, “The author of the majority opinion has drafted what would make an engrossing TED Talk  or, possibly, an introductory lecture in Political Philosophy. But as an appellate court decision, it  wholly fails to grapple with the relevant constitutional question in this appeal: whether a state’s  constitutional prohibition of same-sex marriage violates equal protection under the Fourteenth  Amendment. Instead, the majority sets up a false premise—that the question before us is “who  should decide?”—and leads us through a largely irrelevant discourse on democracy and  federalism. In point of fact, the real issue before us concerns what is at stake in these six cases  for the individual plaintiffs and their children, and what should be done about it. Because I reject  the majority’s resolution of these questions based on its invocation of vox populi and its  reverence for “proceeding with caution” (otherwise known as the “wait and see” approach), I  dissent.”

She challenges the treatment by the majority of the plaintiffs in the cases as “mere abstractions,” saying: “Instead of recognizing the plaintiffs as persons, suffering actual harm as a result of being denied  the right to marry where they reside or the right to have their valid marriages recognized there,  my colleagues view the plaintiffs as social activists who have somehow stumbled into federal  court, inadvisably, when they should be out campaigning to win ‘the hearts and minds’ of  Michigan, Ohio, Kentucky, and Tennessee voters to their cause. But these plaintiffs are not  political zealots trying to push reform on their fellow citizens; they are committed same-sex  couples, many of them heading up de facto families, who want to achieve equal status—de jure status, if you will—with their married neighbors, friends, and coworkers, to be accepted as  contributing members of their social and religious communities, and to be welcomed as fully legitimate parents at their children’s schools. They seek to do this by virtue of exercising a civil  right that most of us take for granted—the right to marry.”

Judge Daughtrey then refers to one major element in the other Circuit Court decisions – the effect same-sex marriage bans on the children of couples who seek the right to marry. She writes, “Readers who are familiar with the Supreme Court’s recent opinion in United States v.  Windsor…and its progeny in the circuit courts, particularly the Seventh  Circuit’s opinion in Baskin v. Bogan…(‘Formally these cases  are about discrimination against the small homosexual minority in the United States. But at a  deeper level, . . . they are about the welfare of American children.’), must have said to  themselves at various points in the majority opinion, ‘But what about the children?’ I did, and I  could not find the answer in the opinion. For although my colleagues in the majority pay lip  service to marriage as an institution conceived for the purpose of providing a stable family unit  ‘within which children may flourish,’ they ignore the destabilizing effect of its absence in the  homes of tens of thousands of same-sex parents throughout the four states of the Sixth Circuit.”

Supreme Court Justice Ruth Bader Ginsburg noted in a speech in Minnesota this summer, that court observers should watch the Sixth Circuit. If the Sixth Circuit makes a ruling different from the other [then three, now four] Circuit Courts, the Supreme Court would be compelled to take up the issue.

And that is exactly what has happened with the rulings of the Sixth Circuit today. There are already news stories saying the cases will be appealed by the plaintiffs to the Supreme Court. It is uncertain if, or when, the court will take up the appeals.

The full text of the opinion and the dissent are available at this link: http://www.ca6.uscourts.gov/opinions.pdf/14a0275p-06.pdf