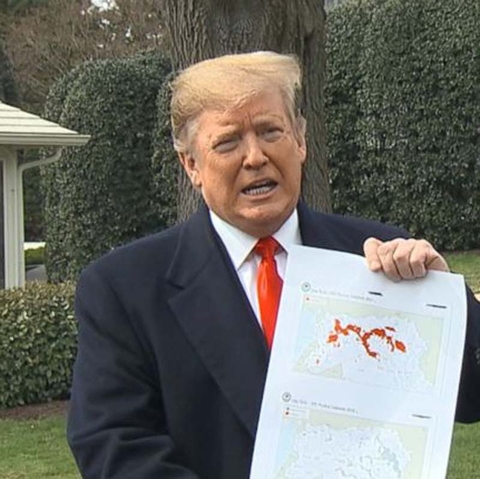 This March, the president claimed ISIS was "100% defeated" in Syria. File photo.

A photo of Joe Biden

Trump tweeted Sunday of Biden: "Sleepy Joe said he never spoke to the Ukrainian company, and then the picture came out where he was playing golf with the company boss and Hunter..."

Facts First: The photo Trump appears to be referencing does not show Joe Biden playing golf with the "company boss" of Burisma Holdings, the Ukrainian natural gas company where his son Hunter Biden was a board member. The person in the photo is an American named Devon Archer, a longtime business associate of Hunter Biden who has also served on the Burisma board. A board member is not the "company boss" -- nor an "exec," as a previous Trump tweet had identified Archer.

The fourth person in the photo with Archer and the Bidens has not been publicly identified, but he is not Burisma owner Mykola Zlochevsky or top executive Taras Burdeinyi.

Trump tweeted Sunday that Hunter Biden was "handed $100,000 a month (Plus,Plus)" for his role at Burisma.

Facts First: There is no basis for the "$100,000 a month (Plus, Plus)" assertion. The New York Times reported that Hunter Biden was paid "as much as $50,000 per month in some months" for his role on the board of directors of Burisma Holdings, a Ukrainian natural gas company.

The first whistleblower reported that Trump "pressured" Zelensky to investigate Biden and his son Hunter Biden, to help in locating Democratic computer servers and to speak with Trump's personal lawyer Rudy Giuliani and Attorney General William Barr. Trump can argue that he was making friendly requests, not applying pressure, but he did make all three requests, according to the rough transcript released by the White House.

The first whistleblower also alleged that Trump suggested Zelensky might want to keep Ukraine's prosecutor general, Yuriy Lutsenko, on the job. The rough transcript does not show Trump saying this. However, it is not a verbatim transcript.

The first whistleblower and Schiff

Trump tweeted Sunday: "Nancy Pelosi knew of all of the many Shifty Adam Schiff lies and massive frauds perpetrated upon Congress and the American people, in the form of a fraudulent speech knowingly delivered as a ruthless con, and the illegal meetings with a highly partisan "Whistleblower" & lawyer...This makes Nervous Nancy every bit as guilty as Liddle' Adam Schiff for High Crimes and Misdemeanors, and even Treason. I guess that means that they, along with all of those that evilly 'Colluded' with them, must all be immediately Impeached!"

Facts First: Members of the House are not subject to impeachment, though they can be expelled. The actions of Pelosi and Schiff do not come close to meeting the Constitution's definition of treason. And it is not illegal for the House Intelligence Committee to offer guidance to a potential whistleblower about how to report alleged wrongdoing, as a Schiff spokesman said a committee aide did.

Schiff spokesman Patrick Boland said it was a "regular occurrence" for a whistleblower to contact the committee for guidance, and said that committee staff "appropriately advised" the whistleblower.

When Republicans controlled the committee in 2016, a spokesman for then-chair Rep. Devin Nunes told The Intercept that they had received whistleblower complaints from "individuals who approach the committee directly."

A timetable for Syria

Trump tweeted Monday morning about his decision to pull troops out of northern Syria: "The United States was supposed to be in Syria for 30 days, that was many years ago. We stayed and got deeper and deeper into battle with no aim in sight."

Facts First: There was never any specific timeline for the US military's involvement in Syria, much less a timeline of a mere 30 days. (Trump had previously claimed, eight times, that US involvement was supposed to last "three months" or "four months.")

"There was never a 30-day timetable on the US presence in Syria," said Syria expert Steven Heydemann, a professor of government and director of the Middle East Studies program at Smith College. "The previous administration, and officials serving in this administration, have never offered a fixed timetable for the US mission. Official statements have emphasized that the presence of US forces would be short, limited in scope, and small. But beyond general comments along those lines, there has been no statement indicating it would end after 30 days."

Trump tweeted Monday morning that his accomplishments in Syria include "capturing thousands of ISIS fighters, mostly from Europe."

Facts First: A minority of ISIS fighters captured in Syria are from Europe, not most of them. James Jeffrey, Trump's special envoy to the anti-ISIS coalition, said Aug. 1 that about 8,000 of about 10,000 terrorist fighters being held in northeastern Syria are Iraqi or Syrian nationals; there were "about 2,000 ISIS foreign fighters" from all other countries.

Trump himself tweeted in February to ask that European countries take back "over 800" ISIS fighters captured in Syria.

Facts First: Trump's approval rating among Republicans is very high, regularly in the 80s and sometimes creeping into the 90s, but it has not been 95% in any recent public poll.