FBI director: Russia is the 'most aggressive actor' in election interference 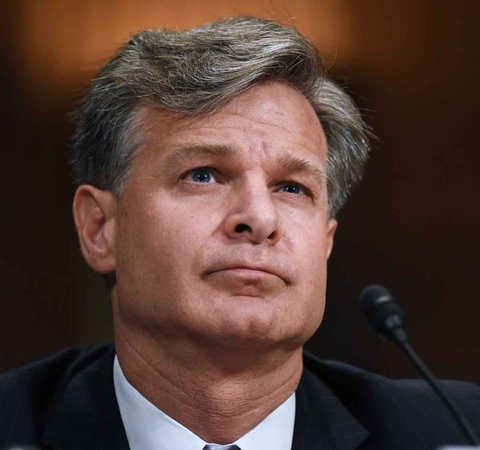 FBI Director Christopher Wray said Wednesday that Russia was engaging in real-time "malign influence operations" against the United States and called the country the "most aggressive actor" in the space of election interference. The wide-ranging interview at times placed him in contrast with the President, who spent the week waffling on rhetoric to describe Russia's threat.

Speaking with NBC News anchor Lester Holt at a national security forum in Aspen, Colorado, Wray said the Russian operations were "very active" and "aimed at sewing discord and divisiveness in this country."

Wray also said that his "view has not changed" on the fact, established by the 2017 intelligence community assessment, that "Russia attempted to interfere with the last election."

Nearly one year into his tenure as President Donald Trump's hand-picked FBI chief, Wray's remarks were a stark staking of claim on territory that Trump has consistently muddied.

On Monday, Trump cast doubt on the intelligence community's assessment of Russian interference in a news conference with Russian President Vladimir Putin, and earlier on Wednesday appeared to suggest he did not believe Russian measures against American democracy were ongoing.

Trump and his press secretary Sarah Sanders have since attempted to clean up both comments, claiming semantic mistakes and misunderstandings. Trump also told CBS News Wednesday that he "accepts" the US intelligence assessment that Russia continues to target the United States.

In his interview, Wray said that the intelligence community has not observed an effort by Russia to target specific election infrastructure as it did in 2016, but "we could just be a moment away from it going to the next level."

"To me, it's a threat that we need to take extremely seriously and respond to with fierce determination and focus," Wray said. He added that the FBI was "looking at ways to increase awareness" around disinformation campaigns and suggested the American public think "critically about what is this I'm reading."

With a characteristic calm, Wray spent much of the hour-long sit-down answering questions about the controversies that have plagued the bureau in the past year.

He called special counsel Robert Mueller a "straight shooter" and declined to push back directly on criticisms levied against the FBI by Trump, instead reiterating a strong defense of the bureau's work.

Wray did, however, offer a rebuttal to some Republican lawmakers who called for action against disgraced FBI agent Peter Strzok, whose anti-Trump messages were a central focus of a stinging report released earlier this year by the Justice Department's watchdog office.

Conservative House members have also proved a thorn in the FBI's side in recent months as they've ratcheted up demands for documents about Strzok and other decisions made by bureau officials as they investigated Hillary Clinton's email server and potential collusion between members of the Trump campaign and Russia.

Wray acknowledged a "tension" surrounding congressional oversight of the FBI and said he would be "unwilling to budge on talking about ongoing investigations and protecting sources and methods."

"There will always be somebody who says 'no, no, no, this one is special, this one is different, this is a unicorn, we should do it this time,'" Wray said. "Those are precisely the times when it's important to do it by the book and stay consistent with precedent."

Asked if he had ever threatened to resign at points throughout his dramatic year, as CNN and other news outlets have reported, Wray joked: "I'm a low-key, understated guy, but that should not be mistaken for what my spine is made out of."