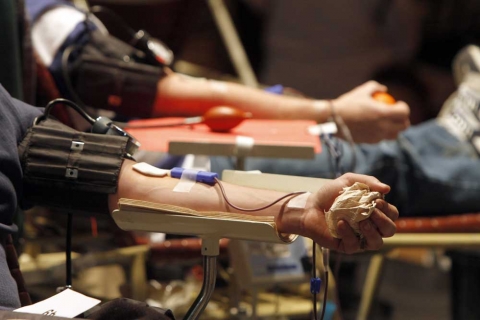 The FDA is again considering changes to it policy on blood donation by men who have sex with men. AP Photo, Toby Talbot, File.

After years of study, the Food and Drug Administration (FDA) last December changed the rules on blood donation by men who have sex with men (MSM). The old rule banned gay and bisexual men from donation for life. The new rule allows donations if a year has passed since the last sexual encounter with another male.

Now it appears that the FDA is at least exploring another change to the rules. The outcry after December’s rule change was strong from LGBTQ advocates, who stated the obvious – most men, regardless of their sexual orientation, will have at least one sexual encounter a year, so the new rule still amounted to a lifetime ban.

This week, the FDA sought public comment on its current one-year rule, signaling the potential for changes to the ban, according to the Human Rights Campaign. The action came after  over 100 House members wrote FDA Commissioner Dr. Robert Califf, requesting an update on the implementation of the current donor policy. A similar letter was drafted by Senators Tammy Baldwin (D-WI) and Elizabeth Warren (D-MA), and signed by 22 of their colleagues.

According to Tiime, “The U.S. Food and Drug Administration on Tuesday posted a request for public comment on what alternative blood donor deferral policies could look like, signaling the possibility that longstanding restrictions on gay blood donations may be lifted.”

U.S. Representative Mike Quigley, Vice-Chair of the Congressional LGBT Equality Caucus, expressed support for the possible change, Time reported. Rep. Quigley said, “’I am encouraged by today’s announcement that the FDA will look into policy solutions in order to move away from the discriminatory time-based deferrals and move closer to individual risk assessment as it relates to blood donor safety screenings.’”

“Interested persons are invited to submit comments, supported by scientific evidence such as data from research, regarding potential blood donor deferral policy options to reduce the risk of HIV transmission, including the feasibility of moving from the existing time-based deferrals related to risk behaviors to alternate deferral options, such as the use of individual risk assessments.

“Additionally, comments are invited regarding the design of potential studies to evaluate the feasibility and effectiveness of such alternative deferral options. FDA will take the comments received into account as it continues to reevaluate and update blood donor deferral policies as new scientific information becomes available.”

“1. What questions would most effectively identify individuals at risk of transmitting HIV through blood donation?

“2. Are there specific questions that could be asked that might best capture the recent risk of a donor acquiring HIV infection, such as within the 2 to 4 weeks immediately preceding blood donation?

“3. How specific can the questions be regarding sexual practices while remaining understandable and acceptable to all blood donors? For example, could questions about specific sexual behaviors be asked if they helped to identify which donors should be at least temporarily deferred because of risk factors? To the extent the questions are explicit about sexual practices, how willing will donors be to answer such questions accurately? 7

“5. What changes might be necessary within blood collection establishments to assure that accurate, individual HIV risk assessments are performed?

“6. How best to design a potential study to evaluate the feasibility and effectiveness of alternative deferral options such as individual risk assessment?”

The FDA stresses that it will be relying on comments “supported by scientific evidence,” but its willingness to proceed with consideration of different methods of deferral periods for blood donation by MSM is promising.

You can view the full FDA request for comments at https://s3.amazonaws.com/public-inspection.federalregister.gov/2016-1780....