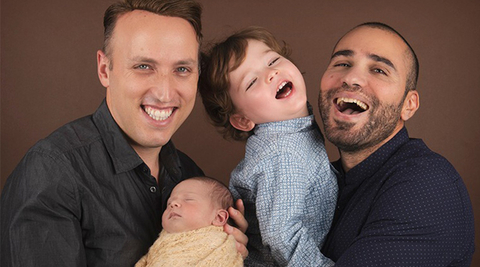 A federal court in Maryland today ordered the U.S. Department of State to recognize the U.S. citizenship and issue a U.S. passport to 1-year old Kessem Kiviti, a baby born abroad to a same-sex married couple who was refused recognition as a U.S. citizen from the moment of her birth by the Trump Administration despite federal law giving her that right. The State Department insisted on treating Kessem as an immigrant because she was born abroad and is not related biologically to both parents.

“We are tremendously relieved that the court recognized what we always knew: that our daughter was a U.S. citizen by birth,” said Kessem’s parents, Roee and Adiel Kiviti. “We are proud we taught our little girl to stand up for what’s right even before she could crawl. No child should be denied her rights because her parents are LGBT, and no family should have to endure the indignity we did.”

The lawsuit was brought by Lambda Legal and Immigration Equality and pro bono counsel Morgan Lewis on behalf of the Kivitis, a married gay couple, and their daughter, Kessem, whom the Trump Administration refused to recognize as a U.S. citizen since birth, even though both of her parents are U.S. citizens. Kessem was born abroad via gestational surrogacy, and while federal law dictates that a child born to two U.S. citizens automatically becomes a citizen, the State Department has refused to recognize Kessem as a citizen because she is not biologically related to both of her fathers.

“After this week’s Supreme Court victory affirming that LGBT people cannot be carved out from laws prohibiting discrimination in employment, today’s victory confirms once again that married same-sex couples cannot be carved-out from laws tied to marriage, as is the Immigration and Nationality Act. The Immigration and Nationality Act does not distinguish between the marital children of same-sex and different-sex couples. As the court noted, to do so would violate the clear terms of the law and raise grave constitutional concerns.” said Omar Gonzalez-Pagan, Senior Staff Attorney at Lambda Legal and one of the lawyers of the family. “The law provides for the recognition of citizenship to the children born abroad of married couples who are U.S. citizens. This provision applies equally to all couples regardless of whether the parents have a biological relationship with their children. It was callous and discriminatory for the State Department to refuse to recognize baby Kessem as the U.S. citizen she is. Today’s victory shows how unlawful the Department of State’s actions really were.”

“Today, the court rejected the State Department’s efforts to insert a biology requirement into the law where none exists and its resulting discriminatory treatment of the families formed by married same-sex couples,” said Karen Loewy, Senior Counsel at Lambda Legal.   “As the Supreme Court has made clear, the Constitution forbids the government from advantaging different-sex couples over same-sex couples in providing a benefit related to marriage.  This decision is a long-overdue victory for this family and we hope it brings peace of mind to them and all LGBT parents in similar situations.”

Today’s decision dovetails a similar lawsuit pending before the U.S. District Court for the Northern District of Georgia also filed by Lambda Legal, Immigration Equality and Morgan Lewis on behalf of married U.S.-citizen couple Derek Mize and Jonathan Gregg and their daughter, Simone Mize-Gregg, whose citizenship is similarly being denied recognition by the State Department.

Roee and Adiel Kiviti married in California in 2013. They had their daughter Kessem via gestational surrogacy in Canada in February 2019. Because only Adiel has a biological connection to Kessem, the State Department disregarded Roee and Adiel’s marriage and treated Kessem as “born out of wedlock,” meaning that they required her to have a biological relationship to a U.S. citizen parent who has resided in the U.S. for five years to automatically obtain her U.S. citizenship. This requirement is not meant to apply to the children of married U.S. citizens.

“This is a huge victory for the Kiviti family,” said Aaron C. Morris, Executive Director of Immigration Equality. “Yet another federal court agrees with us that a biological connection is not required for married U.S. citizen parents to pass on citizenship to their children. This just makes sense. It’s love that makes a family, not biology. We will continue to fight this battle until the State Department ends its discriminatory policy.”

The Immigration and Nationality Act states that children of married U.S. citizens born abroad are U.S. citizens from birth so long as one of their parents has lived in the U.S. at some point, but the State Department routinely denies that right to same-sex couples and their marital children. While different-sex couples are automatically presumed to both be parents of their children, same-sex couples are subjected to invasive questioning about how they brought their child into their family, and because one parent is not a biological parent, they are treated as if they are not married, and their children are not recognized as citizens unless the biological parent can meet additional criteria.