The first legal same-sex marriage in US was in 1971 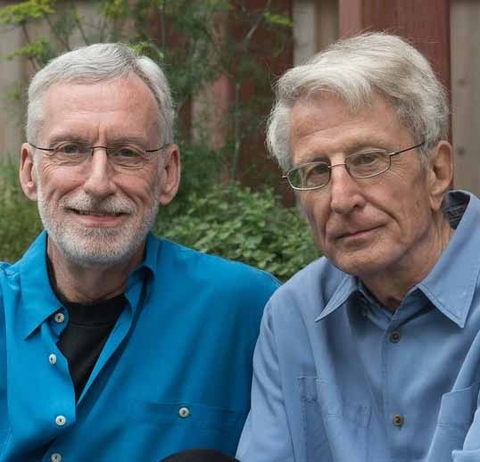 Most of us think that the first legal same-sex marriages happened in 2003 in Massachusetts. We are wrong. The first, legal, same-sex marriage actually took place in Blue Earth County, Minnesota between Richard John “Jack” Baker and Michael McConnell.

Same-sex marriage wasn’t legal then in Minnesota. But on the other hand, it wasn’t illegal. Baker, a law student did his research.

“He spent hours in the library researching Minnesota’s marriage statute word for word,” according to NBC OUT. “He discovered a loophole: It did not state that two people of the same sex couldn’t get married.”

Baker and McConnell applied for a marriage license first in Hennepin County (Minneapolis) in 1970. They were turned down and filed a lawsuit, which the Minnesota Supreme Court dismissed in late 1971.

But, before the state’s high court returned their ruling, they applied for a license in Blue Earth County.  It was issued, and the couple were married September 3, 1971.

“Once the certificate arrived back to the state, the county’s attorney simply told the clerk to not record it, but no one asked that the marriage be dissolved: the state simply acted as if it was simply not valid,” reports LGBTQNation.com.

“Meanwhile, Baker and McConnell have insisted ever since that their marriage was a legal one, thanks to a legitimate marriage certificate, signed by the appropriate witnesses including the minister who officiated their nuptials.”

Forty-seven years later, they are still together and in their 70’s. For Social Security purposes, they wanted to confirm their status as a married couple. So they asked the state to confirm that their marriage was a legal one.

In September 2018, a district court in Minnesota ruled that, “The marriage is declared to be in all respects valid.”

“It was now time for the federal government to respond,” said LGBTQNation.

“February 16, 2019, just two days after Valentine’s Day, the Social Security Administration sent a letter to the couple, confirming once and for all that their 1971 marriage was legal, stating that they were indeed entitled to monthly husband’s benefits.”

Spousal benefits allow a spouse to receive 50 percent of the other spouse’s social security benefit if that benefit would be higher than the applying spouse would receive based on his (or her) lifetime earnings. The Social Security Administration will calculate both benefits, and apply the higher of the two as the spousal benefit. In this way, a couple can maximize what they receive from Social Security.

This wasn’t the first time that the couple was in the news. They were both long-term LGBTQ activists in Minnesota. Baker ran as an openly gay candidate for Minnesota Student Association president in 1971 at the University of Minnesota, one of the nation’s largest campuses. He was elected, and reelected the next year.

He was the first openly gay student government president in the country.

In 2016 the couple told their story in a book, The Wedding Heard ‘Round the Word: America’s First Gay Marriage. In it they talk about their joy at their long-term union and some of the problems they encountered because of it.

“Repercussions were immediate: Michael’s job offer at the University of Minnesota was rescinded, leading him to wage a battle against job discrimination with the help of the Minnesota Civil Liberties Union. The couple eventually reached the U.S. Supreme Court with two precedent-setting cases,” writes a reviewer of their book.

“TIME magazine listed the twenty-five most influential marriages of all time and included Michael and Jack, and they were recently profiled in a cover story in the Sunday New York Times. Their long campaign for marriage equality and insistence on equal rights for all citizens is a model for advocates of social justice and an inspiration for everyone who struggles for acceptance in a less-than-equal world.”

Congratulations to Jack and Michael for a long, happy life together; may they have many more years together.