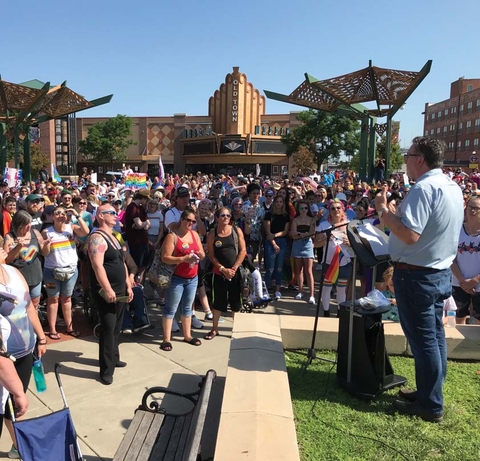 September brings another Wichita Pride event to the Air Capital City known as #ICT. This event follows the heels of the successful Stonewall Rally and Unity March held in July, which was led by Kansas Lieutenant Governor Lynn Rogers.

Wichita Pride will present it’s 2019 Pride Celebration the weekend of September 27-29. Leading up to the Festival weekend will be several events, including the Pride Royalty Pageant on September 6, a youth “Wallflower Dance” on September 21, and a 70s‑themed “Retro Disco Skate Party” on September 22.

2019 Wichita Pride Buttons ($5) are required for all events except the Wallflower Dance. Buttons and other Pride merchandise will be available for purchase at each event site.

Fall festivities kick off with our 2019 Wichita Pride Royalty Pageant on September 6. The Pageant will be held at Club Boomerang, 1400 E 1st St., beginning at 9 p.m.

“This year, Wichita Pride is proud to announce that our Royalty will be inclusive of all genders,” said Stephanie Byers, Wichita Pride communications director. “Drag performers, no matter how they identify, will be able to compete for one of three titles.”

Byers said this year’s awards would be titled Your Majesty, Your Highness, and Your Excellency.

Mayberry Cultural and Fine Arts Magnet Middle School is sponsoring the Wallflower Dance on September 21 from 7 p.m. to 9 p.m. “With a multi-cultural focus, Mayberry is committed to inclusion of diversity in all its forms,” said Byers.

The Wallflower Dance is for students grade 6 through 12, and requires a current Wichita‑area student ID to attend.

“The event will provide a platform for students who are interested in being the 2019 Wichita Pride Student Ambassador to showcase themselves, and will host the Wichita Pride Youth Drag Show,” Byers said. “We are happy to welcome middle and high school students, and hope to see supportive parents visit as well.”

On September 22, Wichita Pride will host a 70s themed “Retro Disco Skate Party” at Skate South, 1900 E. McArthur, from 2 p.m. to 4 p.m. “Put on your best butterfly collar shirt and bell-bottoms and come out and skate the afternoon away,” said Byers. “Show off your best moves!”

On Saturday, September 28, at the Mid-America All Indian Center, Wichita Pride will host the Saturday Night Pride Party. Exhibits will open at 5 p.m. and the variety show, featuring many local and regional performers, will begin at 6 p.m. Food and adult beverages will be available from food trucks and a concession area on site.

“Stay tuned, as there may be a surprise guest speaker or two,” Thomas Witt, Equality Kansas’ executive director, said. “We were proud and pleased to be able to bring Kansas Lieutenant Governor Lynn Rogers to the June Stonewall March. We look forward to more state officials speaking out on behalf of our community,” Witt said.

Sunday, September 29, will also be the 2019 Wichita Pride Parade and Pride Festival. The Pride Parade steps off at 1 p.m. at the Old County Courthouse and proceeds to the Mid-America All Indian Center, where the Festival is held. The Festival, which opens at noon, features an afternoon of live entertainment, including many drag performers from around the region.