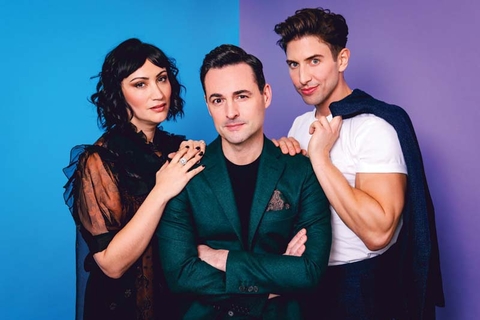 Northwest Arkansas audiences will be the first to see the Tony Award-winning musical, Falsettos, on Friday and Saturday, February 8 and 9 at 8 p.m., following a week of technical rehearsals at Walton Arts Center in preparation for the production’s national tour.

Falsettos revolves around the life of a charming, intelligent, neurotic gay man named Marvin, his wife, lover, about-to-be-Bar-Mitzvahed son, their psychiatrist and the lesbians next door. It’s a hilarious and achingly poignant look at the infinite possibilities that make up a modern family and a beautiful reminder that love can tell a million stories.

Directed by James Lapine with choreography by Spencer Liff (Emmy Award-nominee for FOX’s “So You Think You Can Dance”), this production was nominated for five Tony Awards including Best Musical Revival when it returned to Broadway in 2016.

This production of Falsettos also reunites composer/lyricist William Finn and playwright/director Lapine. In 1981, Finn and Lapine’s one-act musical March of the Falsettos premiered at Playwrights Horizons’ second-floor performance space. It was a critical success and moved to what was then known as the Westside Arts Theatre and enjoyed a long run off-Broadway.

Falsettoland, a second musical by Finn and Lapine, opened in 1990. A continuation of the story of Marvin and his extended family in the early days of the AIDS crisis, Falsettoland repeated the success of its predecessor with rave reviews and a move to the Lucille Lortel Theatre.

In 1992, the two one-act musicals were combined into one and opened on Broadway as Falsettos, which ran for over a year at the John Golden Theatre and won Tony Awards for Finn’s score and Finn and Lapine’s book.

Tickets start at $38 plus applicable fees and can be purchased in-person at the Walton Arts Center Box Office, by calling (479) 443-5600 or by visiting waltonartscenter.org. Patrons also can get reserved parking for $7 when they purchase their show tickets.