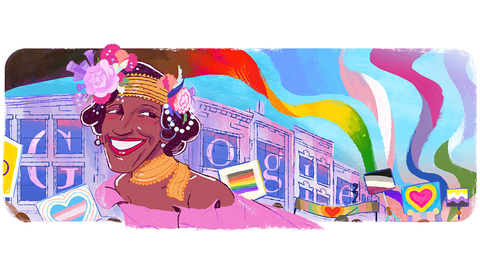 Google is paying tribute to Marsha P. Johnson -- a pioneering figure in the country's LGBT rights movement -- on the last day of Pride month.

The company announced its June 30 Google Doodle will be dedicated to the late activist who was at the center of New York's gay liberation movement for more than 20 years.

The doodle depicts Johnson in all her colorful, flower-in-hair, bright-red-lipstick glory.

The company said it chose June 30th to honor Johnson as it will be the first anniversary since she was posthumously honored as a grand marshal during WorldPride in New York.

"Thank you, Marsha P. Johnson, for inspiring people everywhere to stand up for the freedom to be themselves," Google wrote.

Google.org will also donate $500,000 to the Marsha P. Johnson Institute, the company said. The institute, which launched last year, will continue the work Johnson started, advocating for and organizing on behalf of the transgender community, its founder has previously told CNN.

"For so long, Marsha's history has only been heralded by the LGBTQ community," Elle Hearns, the founder and executive director of the institute, said in a statement.

"Today's Doodle will help teach her story to many more around the world, and about the work that has been historically ignored and often purposely left out of history books. Today's Doodle of Marsha reminds people that Black and LGBTQ+ history is bigger than just a month; it is something to be honored every single day."

A movement in Johnson's hometown

A 19-year-old woman has created a petition -- which in less than two weeks has garnered more than 40,000 signatures -- to replace a statue of Christopher Columbus in the city with one of Johnson.

The creator, Celine Da Silva, told CNN she thinks an honor for the activist in her hometown is long overdue.

"Being that this is her hometown, I think that we should be celebrating her and honoring her here," Da Silva told CNN. "And I think that the LGBT and queer community should be able to learn more about historic figures from their own community."

Da Silva and her boyfriend have plans to bring up their demand to the city council next month. They say they hope a new monument for Johnson will be the first of many steps to create a more inclusive Elizabeth and one that celebrates minorities and LGBT figures like Johnson.

The late activist's family, who still live in the New Jersey city today, say the movement to honor Johnson in her hometown gives them hope.

"I've always said that Marsha was more recognized in New York City and around the world than she is in her own hometown," her nephew, Al Michaels, says. "You have a hero, one of the greatest persons who did something in history and in your own hometown, and you have nothing there to commemorate the experience."

An announcement for another statue of Johnson was made last year by New York City Mayor Bill de Blasio.

De Blasio said the city would commemorate both the work of Johnson and her friend and activist Sylvia Rivera with statues in Greenwich Village. The two helped found the group Street Transvestite Action Revolutionaries (STAR), which offered housing to homeless and transgender youth.

Their monument will be among the first in the world to honor transgender people, the mayor's office had said.