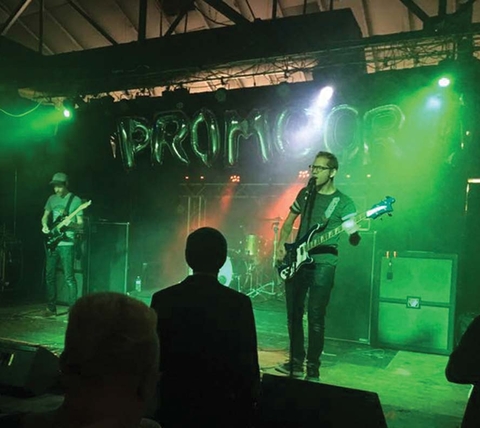 The struggle for equality will be heard loud and clear when two shows featuring outspoken hardcore bands perform. The bands are intent on raising funds and awareness for Tulsa’s Oklahomans for Equality (OkEq) and will ascend on Tulsa on May 17 and 18.

“We have over three dozen bands lined up for this year’s Promcore and Stag, the Promcore pre-show,’” says organizer Aaron Johnson. “We have a really good line up this year we are excited about.”

Johnson says the bands were chosen not only because they are great bands but because they either have LGBTQ+ members or are outspoken in progressive causes.

Case in point; RaceTraitor. This band is set to headline the pre-show May 17 at Tulsa’s Chimera Café, located at 212 N. Main St. You unlikely have to look any further than the band’s name to know this is a group that will not compromise their message.

“I think the hardcore community, like so many at this time in history, are looking to express their values in the face of some regressive and dark political currents,” said RaceTraitor singer and LGBTQ+ activist Mani Mostofi.

“You only love us if you are disgusted with the rise of fascism and authoritarianism and you are on the side of radical social and economic justice, racial equality, queer liberation, environmental justice and the like.”

He says OkEq’s vision is perfectly in line with that of the band.

“When we got asked to play the show, and I dug into OkEq, what impressed me was the way it goes from throwing dances and having fun to conducting serious policy and legislative advocacy,” Mostofi said.

“Activism works best when it is attached to the real community and real lives, and we need to see that everywhere.

Ballista singer River Elliott, a self-described “proud trans woman” says her band is very pleased to be playing Promcore on May 18 at the Vanguard and that the band can support an entity like OkEq.

“We all stand behind anyone that’s been made to feel uncomfortable or like they don’t belong just because they’re a minority, a woman, a member of the LGBT+ community, etc.,” she said.

“As a transgender woman, I’m more than happy to be able to help support other members of the community. Since I first came out, the hardcore scene has been one of the biggest sources of encouragement for me, so it’s really cool to see everyone getting together to raise money for Oklahomans for Equality.”

More information and tickets for both events may be found by searching the keywords PromCore 2019 and Stag, a PromCore Pre-Show on Facebook.