Here's how many people watched "Tiger King" on Netflix 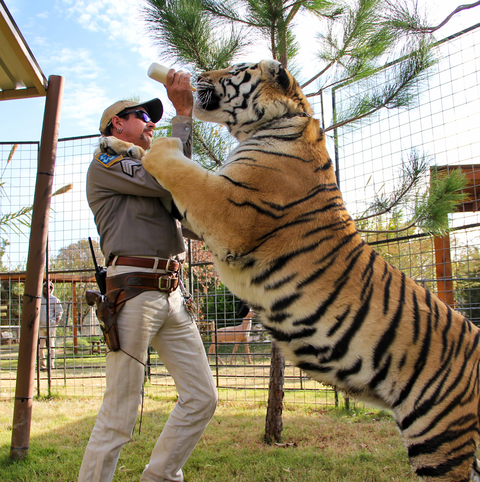 "Joe Exotic" and one of his many tigers. Netflix photo via CNN.

Netflix's "Tiger King: Murder, Mayhem and Madness" has been the talk of the pop culture world since the coronavirus outbreak forced people to stay inside. Now, we have an idea of how many people watched the wild documentary while stuck at home.

Roughly 34 million unique viewers watched the series over the first ten days of its release, according to measurement company Nielsen. This number does not include viewers outside of the United States, and it doesn't include viewing that happened exclusively on mobile, tablet or laptops. The series debuted on March 20.

That's a big number for Netflix, but the show still lags behind the third season of "Stranger Things," which brought in about 36 million viewers in the US in its first 10 days over the summer, according to Nielsen.

"Tiger King," which tells the story of the life of Joseph Allen Maldonado-Passage, aka Joe Exotic, has been the breakout hit of the last couple of weeks. It has capitalized on an audience that's stuck inside because of social distancing, spawning online discussion, memes and opinion pieces.

"Tiger King" may not have set a record, at least by Nielsen's counting, but its viewership is still impressive.

"Stranger Things" is Netflix's biggest hit show and has had a loyal following for multiple seasons. "Tiger King," on the other hand, is a documentary series that seemingly came out of nowhere.

Brian Lowry, CNN's media critic, called it the "weird docu-series distraction we can use right now."

"Netflix has made a lot of noise with unscripted programming, but it's going to roar with this beyond-bizarre docu-series distraction, which demonstrates that outlandish people who love filming themselves are a formula for TV that's grrrr-reat," Lowry wrote in his review.

Netflix did not immediately respond with comment on Nielsen's numbers.