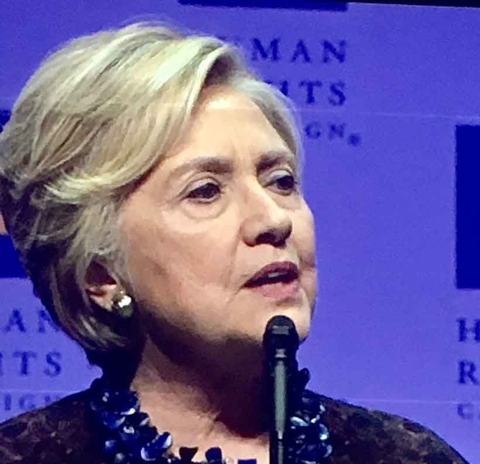 Clinton “blasted the Trump administration’s record on civil rights for gay, lesbian and transgender people during its first nine months, telling an audience of LGBT advocates in Washington ‘we have some tough battles ahead’,” Politico.com reported.

“The attacks on the LGBT community here at home and around the world are striking and scary. I can only imagine what it’s like to be in the position that so many people still find themselves in in our country,” Clinton said.

“I do know what it feels like to be torn down and attacked, and I want you to know that I’m with you,” she added.

Clinton received four prolonged standing ovations. She “came out fighting after a quiet start recounting as she has a number of times how she dealt with her election loss; from cleaning closets, to walking in the woods to drinking Chardonnay, she electrified the room,” said Peter Rosenstein in HuffPost’s coverage.

“It was clear without her having to state it, which she did anyway; she is not ready to be silenced. We as a community need to be thankful for that. Hillary spoke about a number of issues including healthcare and how repeal of the ACA would hurt our community. She spoke eloquently and forcefully on transgender rights and slammed the Trump administration for not respecting transgender members of the military who for years have heroically defended our country and our democracy.

“She called out the Republican Party using an old Mexican proverb that says ‘Tell me with whom you walk, and I will tell you who you are.’ referring to their endorsement of Roy Moore in the Alabama senate race among other members of their party.

“She closed her speech saying, ‘I would have rather come here tonight from a closer address’ and not one person in the room wasn’t thinking what could have been with only about 100,000 votes changed in three states. The nation and the world are the losers for that.”

Other speakers included Khizr Khan, the American Muslim Gold Star parent first heard from at the Democratic National Convention; Billie Jean King, an LGBT icon who has fought for decades for women’s equality; and Sen. Kamala Harris (D-CA), who is a rising star in the Democratic Party.

You can read the Huffington Post’s entire article here.