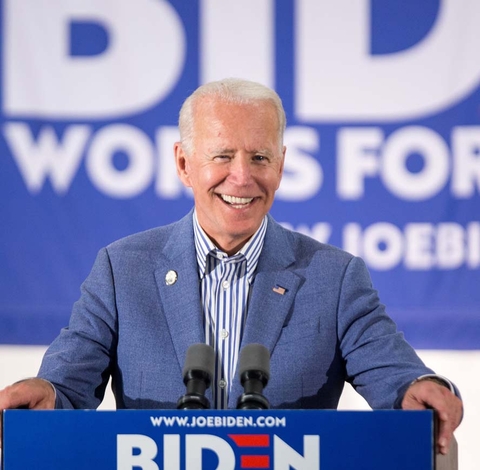 Democratic presidential candidate Joe Biden and his wife, Jill Biden, stopped by New York City's Stonewall Inn on Tuesday in recognition of the 50th anniversary of the riots that helped catapult the modern gay rights movement.

The former vice president has been vocal in his support of the LGBTQ+ community on the campaign trail.

"Stopped by @TheStonewallNYC to celebrate #PrideMonth & #WorldPride where the movement began 50 years ago," Biden said in a tweet.

The Bidens' visit comes during Pride Month, during which the former vice president has been vocal about LGBTQ+ issues. In a speech to the Human Rights Campaign in Columbus, Ohio, earlier this month, he accused the Trump administration of endangering the LGBTQ+ community by failing to defend its rights and safety. He said passing the pro-LGBTQ+ Equality Act would be his top priority if elected president.

"We've already had five, just this year, five black transgender women killed violently in 2019 -- that's outrageous. It must, it must, it must end," Biden said during the speech. "And the fastest way to end it is, end the Trump administration."

Biden has officiated multiple same-sex weddings. He famously made headlines in 2012 when he came out in support of same-sex marriage, putting President Barack Obama in a tough position to announce his changed stance on the issue too.

The Stonewall Inn, located in Greenwich Village, is an iconic New York City landmark, which Obama designated as the country's first national monument to LGBTQ+ rights in 2016.

The bar made history on June 28, 1969, after violent demonstrations erupted following an early-morning police raid, prompting Stonewall patrons to fight back. LGBTQ+ men and women were frequently discriminated against by New York police through laws that prohibited same-sex relations at the time, and raids on gay bars were common.

Protests continued outside the bar weeks after several of the patrons were arrested. The demonstrations are considered to have sparked the larger gay rights movement in the United States.

The first LGBTQ+ Pride was held one year later on the anniversary of the riots.

"For all the hard-won progress, for as much as we can celebrate how much better things have gotten -- this fight is not over," Biden said in another tweet.

He continued in that tweet: "We have to come together to stand up to abuses of power, ensure that everyone is treated with dignity, and fight for full equality."

Earlier this month, the New York City Police department formally apologized for its role in the violence that led to the riots.