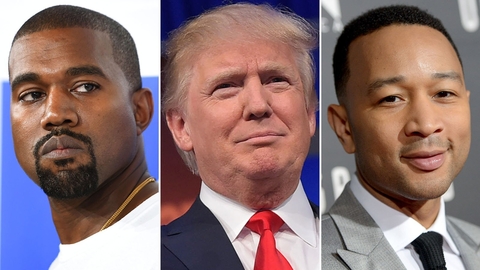 "He said it multiple times," Legend said in an interview on the Dan Wootton Interview podcast. "I think he's serious."

Legend said he guessed West might run as an independent candidate, although they hadn't had conversations about it. "He's never told me anything about what party," he said. He also said he thought West's political ambitions were inspired by President Donald Trump.

"He sees some aspects of himself in Trump and sees that Trump winning makes it feel like he could do it too," Legend said.

After West's public show of support for Trump in April, in which he tweeted a photo wearing a MAGA hat, Legend reached out and said he hoped West would reconsider aligning himself with the President.

West tweeted out screenshots of their texts, which Legend said in the podcast interview "shocked" him.

West first said he would run for president at the 2015 VMAs.

He ended his acceptance speech for the Video Vanguard Award by saying he would run in 2020, but has since pushed it back four years. In an interview with Power 92 Chicagolast week, West said that if he ran, it wouldn't be until 2024, and he was confident he would win.

West also said in that interview that he believes Trump has made people more aware of racism in America.

"People are like, 'Man, Trump's racist,' " he said. "If racism was a deal breaker we need to get out of America, period. He just shows you what it is. It's like the grass is cut low now."

If West were to run, he said during an interview in May with Charlamagne, he imagined his campaign would be "the Trump campaign and maybe the Bernie Sanders principles. That would be my mix."

West's would-be FLOTUS, wife Kim Kardashian West, was at the White House this week for a listening session on prison sentencing and clemency issues.

She met with Trump in May to advocate for the release of Alice Marie Johnson, a nonviolent offender sentenced to life in prison.

Johnson's sentence was commuted by Trump, and Kardashian West said she will continue to push for changes to the criminal justice system.

CNN asked about West in a poll conducted in May and the results suggest he'd have some work to do on his popularity. At the time, after his alignment with Trump, 23% of Americans had favorable and 53% had unfavorable opinions of him. His approval was higher among Trump supporters.