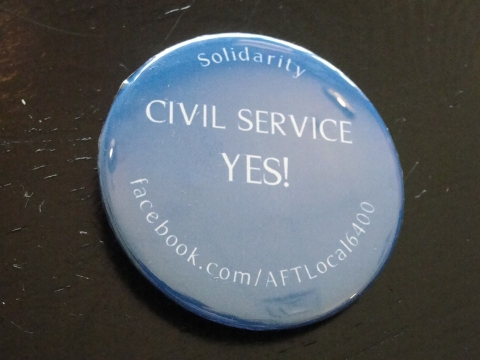 AFT Local 6400 represents the service and maintenance workers at K-State.

Kansas State University classified employees are scheduled to take an important vote Nov. 19-22 regarding leaving the state Civil Service system or keeping Civil Service protections intact. The university voting process will be done electronically and by ballot through the university e-mail and mail system. Many classified employees have concerns about this process as do our union members who are also classified staff. AFT Local 6400 represents the service and maintenance workers at K-State.

Computers have been known to have problems including but not limited to easy manipulation, crashing and taking data incorrectly. Furthermore the voting process by the administration has minimal transparency regarding vote tabulations as there is no third party non-neutral monitor(s) or guidelines for a recount process if requested among other concerns. The internationally recognized Carter Center says of e-voting: "The Carter Center and the international election observation community recognize these emergent technologies as one of the largest challenges facing their work. By its very nature, e-voting technology limits transparency as many aspects of vote tabulation occur invisibly."

We feel there is a more democratic way for the Civil Service vote that would be fairer and more transparent. One proposal we have is a secret paper ballot should be mailed via U.S. mail to every eligible classified employee, the employee marks their vote and sends this in a sealed envelope to an agreed upon neutral third party. On a scheduled agreed upon day, the neutral third party would count the votes in the presence of classified staff, union members and administration officials.

We encourage all classified staff concerned about the voting process and other issues related to Civil Service protections, to attend President Kirk Schulz's Town Hall Meeting November 15 from 9-10 a.m. and 10-11 a.m. at the K-State Alumni Center.