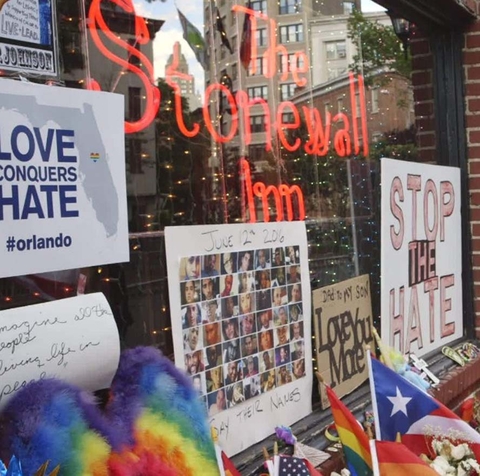 Here is some background information about lesbian, gay, bisexual and transgender milestones in the United States.

Timeline:
1924 - The Society for Human Rights is founded by Henry Gerber in Chicago. It is the first documented gay rights organization.

1950 - The Mattachine Society is formed by activist Harry Hay and is one of the first sustained gay rights groups in the United States. The Society focuses on social acceptance and other support for homosexuals.

April 27, 1953 - President Dwight D. Eisenhower signs an executive order that bans homosexuals from working for the federal government, saying they are a security risk.

September 11, 1961 - The first US-televised documentary about homosexuality airs on a local station in California.

June 28, 1969 - Police raid the Stonewall Inn in New York City. Protests and demonstrations begin, and it later becomes known as the impetus for the gay civil rights movement in the United States.

1969 - The "Los Angeles Advocate," founded in 1967, is renamed "The Advocate." It is considered the oldest continuing LGBTQ+ publication that began as a newsletter published by the activist group Personal Rights in Defense and Education (PRIDE).

June 28, 1970 - Community members in New York City march through the local streets to recognize the one-year anniversary of the Stonewall riots. This event is named Christopher Street Liberation Day, and is now considered the first gay pride parade.

1973 - Lambda Legal becomes the first legal organization established to fight for the equal rights of gays and lesbians. Lambda also becomes their own first client after being denied non-profit status; the New York Supreme Court eventually rules that Lambda Legal can exist as a non-profit.

December 15, 1973 - By a vote of 5,854 to 3,810, the American Psychiatric Association removes homosexuality from its list of mental disorders in the DSM-II Diagnostic and Statistical Manual of Mental Disorders.

1974 - Kathy Kozachenko becomes the first openly LGBT American elected to any public office when she wins a seat on the Ann Arbor, Michigan City Council.

1974 - Elaine Noble is the first openly gay candidate elected to a state office when she is elected to the Massachusetts State legislature.

January 14, 1975 - The first federal gay rights bill is introduced to address discrimination based on sexual orientation. The bill later goes to the Judiciary Committee but is never brought for consideration.

March 1975 - Technical Sergeant Leonard P. Matlovich reveals his sexual orientation to his commanding officer and is forcibly discharged from the Air Force six months later. Matlovich is a Vietnam War veteran and was awarded both the Purple Heart and the Bronze Star. In 1980, the Court of Appeals rules that the dismissal was improper. Matlovich is awarded his back pay and a retroactive promotion.

1976 - After undergoing gender reassignment surgery in 1975, ophthalmologist and professional tennis player Renee Richards is banned from competing in the women's US Open because of a "women-born-women" rule. Richards challenges the decision and in 1977, the New York Supreme Court rules in her favor. Richards competes in the 1977 US Open but is defeated in the first round by Virginia Wade.

1977-1981 - Billy Crystal plays one of the first openly gay characters in a recurring role on a prime time television show in "Soap."

January 9, 1978 - Harvey Milk is inaugurated as San Francisco city supervisor, and is the first openly gay man to be elected to a political office in California. In November, Milk and Mayor George Moscone are murdered by Dan White, who had recently resigned from his San Francisco board position and wanted Moscone to reappoint him. White later serves just over five years in prison for voluntary manslaughter.

1978 - Inspired by Milk to develop a symbol of pride and hope for the LGBT community, Gilbert Baker designs and stitches together the first rainbow flag.

October 14, 1979 - The first National March on Washington for Lesbian and Gay Rights takes place. It draws an estimated 75,000 to 125,000 individuals marching for LGBT rights.

March 2, 1982 - Wisconsin becomes the first state to outlaw discrimination based on sexual orientation.

November 30, 1993 - President Bill Clinton signs a military policy directive that prohibits openly gay and lesbian Americans from serving in the military, but also prohibits the harassment of "closeted" homosexuals. The policy is known as "Don't Ask, Don't Tell."

November 1995 - The Hate Crimes Sentencing Enhancement Act goes into effect as part of the Violent Crime Control and Law Enforcement Act of 1994. The law allows a judge to impose harsher sentences if there is evidence showing that a victim was selected because of the "actual or perceived race, color, religion, national origin, ethnicity, gender, disability, or sexual orientation of any person."

September 21, 1996 - President Clinton signs the Defense of Marriage Act, banning federal recognition of same-sex marriage and defining marriage as "a legal union between one man and one woman as husband and wife."

December 3, 1996 - Hawaii's Judge Chang rules that the state does not have a legal right to deprive same-sex couples of the right to marry, making Hawaii the first state to recognize that gay and lesbian couples are entitled to the same privileges as heterosexual married couples.

April 1997 - Comedian Ellen DeGeneres comes out as a lesbian on the cover of Time magazine, stating, "Yep, I'm Gay."

October 6-7, 1998 - Matthew Shepard is tied to a fence and beaten near Laramie, Wyoming. He is eventually found by a cyclist, who initially mistakes him for a scarecrow. He later dies due to his injuries sustained in the beating.

October 9, 1998 - Russell Henderson and Aaron McKinney from Laramie, Wyoming, make their first court appearance after being arrested for the attempted murder of Shepard. Eventually, they each receive two life sentences for killing Shepard.

May 17, 2004 - The first legal same-sex marriage in the United States takes place in Massachusetts.

October 25, 2006 - The New Jersey Supreme Court rules that state lawmakers must provide the rights and benefits of marriage to gay and lesbian couples.

May 15, 2008 - The California Supreme Court rules in re: Marriage Cases that limiting marriage to opposite-sex couples is unconstitutional.

August 12, 2009 - Milk is posthumously awarded the Medal of Freedom by President Barack Obama.

August 4, 2010 - Proposition 8 is found unconstitutional by a federal judge.

September 20, 2011 - "Don't Ask, Don't Tell" is repealed, ending a ban on gay men and lesbians from serving openly in the military.

May 9, 2012 - In an ABC interview, Obama becomes the first sitting US president to publicly support the freedom for LGBT couples to marry.

September 4, 2012 - The Democratic Party becomes the first major US political party in history to publicly support same-sex marriage on a national platform at the Democratic National Convention.

November 6, 2012 - Tammy Baldwin becomes the first openly gay politician and the first Wisconsin woman to be elected to the US Senate.

June 26, 2013 - In United States v. Windsor, the US Supreme Court strikes down section 3 of the Defense of Marriage Act, ruling that legally married same-sex couples are entitled to federal benefits. The high court also dismisses a case involving California's proposition 8.

June 9, 2015 - Secretary of Defense Ash Carter announces that the Military Equal Opportunity policy has been adjusted to include gay and lesbian military members.

April 28, 2015 - The US Supreme Court hears oral arguments on the question of the freedom to marry in Kentucky, Tennessee, Ohio and Michigan. On June 26 the Supreme Court rules that states cannot ban same-sex marriage. The 5-4 ruling had Justice Anthony Kennedy writing for the majority. Each of the four conservative justices writes their own dissent.

June 24, 2016 - Obama announces the designation of the first national monument to lesbian, gay, bisexual and transgender (LGBT) rights. The Stonewall National Monument will encompass Christopher Park, the Stonewall Inn and the surrounding streets and sidewalks that were the sites of the 1969 Stonewall uprising.

June 30, 2016 - Secretary of Defense Carter announces that the Pentagon is lifting the ban on transgender people serving openly in the US military.

August 5-21, 2016 - A record number of "out" athletes compete in the summer Olympic Games in Rio de Janeiro. The Human Rights Campaign estimates that there are at least 41 openly lesbian, gay and bisexual Olympians -- up from 23 that participated in London 2012.

November 9, 2016 - Kate Brown is sworn in as governor of Oregon, a day after she was officially elected to the office. Brown becomes the highest-ranking LGBT person elected to office in the United States. Brown took over the governorship in February 2016 (without an election), after Democrat John Kitzhaber resigned amidst a criminal investigation.

June 27, 2017 - District of Columbia residents can now choose a gender-neutral option of their driver's license. DC residents become the first people in the United States to be able to choose X as their gender marker instead of male or female on driver's licenses and identification cards. Similar policies exist in Canada, India, Bangladesh, Australia, New Zealand and Nepal.

June 30, 2017 - The US Department of Defense announces a six-month delay in allowing transgendered individuals to enlist in the United States military. Defense Secretary Jim Mattis writes that they "will use this additional time to evaluate more carefully the impact of such accessions on readiness and lethality."

July 26, 2017 - President Donald Trump announces via Twitter that "After consultation with my Generals and military experts, please be advised that the United States Government will not accept or allow Transgender individuals to serve in any capacity in the US Military..."

December 11, 2017 - A second federal judge rules against Trump's prohibition on transgender individuals serving in the military. The Pentagon announces it will begin processing transgender applicants to the military on January first, while the Department of Justice continues to appeal the ruling.

February 26, 2018 - The Pentagon confirms that the first transgender person has signed a contract to join the US military.

March 4, 2018 - Daniela Vega, the star of Oscar-winning foreign film "A Fantastic Woman," becomes the first openly transgender presenter in Academy Awards history when she introduces a performance by Sufjan Stevens, whose song "Mystery of Love" from the "Call Me By Your Name" soundtrack, is nominated for best original song.

March 23, 2018 - Trump rescinds his previous policy to allow a new policy to take effect that will likely disqualify most transgender people from serving in the US military. The White House announces that the policy will say "transgender persons with a history or diagnosis of gender dysphoria -- individuals who the policies state may require substantial medical treatment, including medications and surgery -- are disqualified from military service except under certain limited circumstances." .

January 22, 2019 - The Supreme Court allows Trump's transgender military ban to go into effect. The policy blocks individuals who have been diagnosed with a condition known as gender dysphoria from serving with limited exceptions and specifies that they can serve only according to the sex they were assigned at birth.

June 30, 2019 - New York Governor Andrew Cuomo signs a law banning the use of the so-called gay and trans panic legal defense strategy. The tactic asks a jury to find that a victim's sexual orientation or gender identity is to blame for a defendant's violent reaction. New York follows California, Rhode Island, Illinois, Nevada and Connecticut as the sixth state to pass such a law.