In life and death, love is love 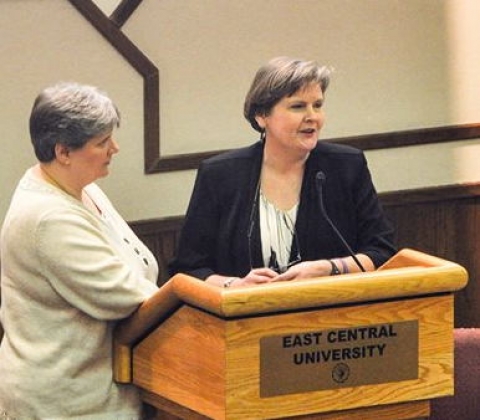 Sharon Baldwin looks on as her love of nearly 20 years, Mary Bishop speaks to students at East Central University in Ada, OK. Photo by Eric Turner.

Whether they’re rehabilitating baby raccoons at their home in Broken Arrow, or editing sections of The Tulsa World, Mary Bishop and Sharon Baldwin have been together for 17 years and simply want to legally marry in Oklahoma.

College professors Susan Barton and Gay Phillips of Tulsa started their careers working with homeless youth and have been a couple since 1984. Together, they have raised a daughter and now have custody of a great nephew. Married in Canada in 2005 and in California in 2008, they want their marriage legally recognized at state and federal levels.

Both couples are co-plaintiffs in a lawsuit filed in 2004 against the state of Oklahoma’s ban on same-sex marriage. After slogging through the courts for nine years, U.S. District Court Judge Terence C. Kern overturned the ban Jan. 14. However, he stayed his order pending an appeal by the state.

For Bishop, it’s a simple issue.

“Webelieve the rights of any minority should never be subjected to the vote of a majority,” she said. “We don’t believe that’s the way our society should function.”

Kern’s decision follows an earlier ruling in December by a Utah judge that overturned that state’s ban on same-sex marriages. The ruling is also on appeal with the Federal 10th District court.

Barton, who teaches American federal government at Tulsa Community College, said the U.S. Constitution protects the equal rights of citizens under the law.

“People should not be ostracized or oppressed by arbitrary, negative or discriminatory legislation,” Barton said.

Kern only ruled on the part of the lawsuit that addresses the Oklahoma state constitution, noting that DOMA’s key provisions have already been declared unconstitutional.

Bishop and Baldwin said the decision to file the joint lawsuit evolved over time because they wanted to provide for one another now and in the future.

“After our commitment ceremony, Sharon and I wanted to provide each other with the protections that we could legally, even though we couldn’t be married, so we went to a lawyer and had him draw up estate documents for us,” Bishop said. “We put all our property together in a trust so that if one of us dies there’s no question that everything we have belongs to the other person.”

She said they tried to legally marry in California in 2008, but by the time their appointment came around, the state had stopped issuing same-sex marriage licenses. Later they were contacted by an attorney asking if they were interested in filing a marriage equality case. The two agreed.

“We thought about it, ‘Do we really want to go out of state and get married? Because it would not be any good to us back here at home – neither our state nor the federal government would recognize it. It’s just going to be a piece of paper. So we decided to pursue making the state of Oklahoma let us get married here,” Bishop said.

The pair later met Barton and Phillips and both couples signed on board.

“They were pretty much on their own for the first five years,” said Toby Jenkins, Executive Director of Oklahomans for Equality, Oklahoma’s oldest gay rights organization, located in Tulsa. “The national groups told them not to file and even our Oklahoma LGBT groups (including us) failed them.”

Baldwin said their original attorney on the case had to bow out of the lawsuit for personal reasons, but karma brought them their current two lead attorneys, Don Holladay and his associate, James Warner III. They work pro bono on the case, although the plaintiffs do pay for some minor expenses, such as copying and filing fees.

“Don and his wife, Kay, have a gay son, and Kay is a co-founder of PFLAG Norman (Parents, Families & Friends of Lesbians & Gays) and has been active in PFLAG nationally,” Baldwin said. “She was saying to Don, ‘You know before you retire, I want you to do something significant for gay rights.’”

Bishop said the Holladay’s son is married in Washington state and his parents want their son’s marriage to be valid in Oklahoma when he comes home to visit.

The rights of children who have same-sex parents were also noted in Kern’s decision. He wrote the reality is that while same-sex couples are not able to “naturally procreate,” they can and do have children by other means.

“About five years ago, me and Nancy McDonald [founder of PFLAG Tulsa] invited the couples to brunch to ask their forgiveness for our organizations not being more supportive,” adds Jenkins. “From that time to present, we have made their lawsuit our cause.

“I figure the plaintiffs would consider us strong partners,” Jenkins concluded.

“As of the 2010 United States Census, there were 1,280 same-sex ‘households’ in Oklahoma who reported as having ‘their own children under 18 years of age residing in their household’ … If a same-sex couple is capable of having a child with or without a marriage relationship, and the articulated state goal is to reduce children born outside of a marital relationship, the challenged exclusion hinders rather than promotes that goal,” Kern’s wrote in his decision.

Future plans for Baldwin and Bishop include building a house on some land they own in Osage County. In their animal rescue work, they release injured or orphaned baby raccoons once they’re healed and older on the land and provide food for them.

Baldwin joked that the pair are also “stereotypical lesbian crazy cat ladies” because they own four cats, some of which are diabetic and need shots.

As for caring for one another in the future, Baldwin said they have all of their paperwork for the trust and estate documents in a safe place and always carry photocopies in their car and in their main luggage.

“We don’t go anywhere without those documents, because you just don’t know …” Baldwin said.“If you want a love story, that’s the love story – taking care of someone who means the world to you. When you want to spend the rest of your life with someone, you want to take care of them.”

“And in death, too,” Bishop added.

Baldwin said it will probably be several years before Oklahoma’s courthouses are filled with same-sex couples seeking to get married.

“But when we do have those marriages, they will be real, they will be permanent and they will not be able to be taken away from us,” she said. “It may not be the whole ball of wax at this exact moment, but it is a step.”

Both couples in the lawsuit gave numerous interviews with local and national press the day Kern’s decision was announced. They also celebrated the advancement for same-sex marriage equality by attending a celebration at the Dennis R. Neill Equality Center in Tulsa.

“We were showered with gifts,” Bishop said. “Everyone has been really, really sweet.”