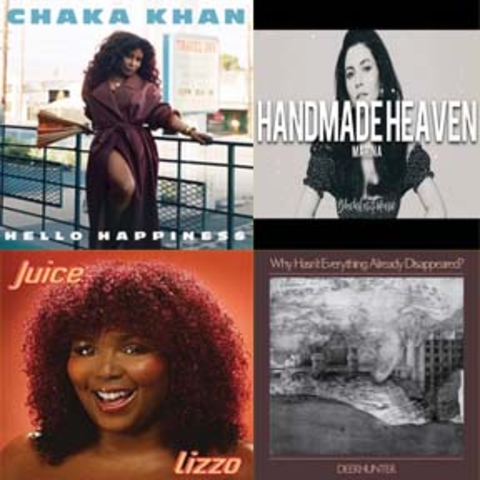 Hello Happiness is the legendary singer’s twelfth studio album is her first since her 2007 album, Funk This.

Lead single Like Sugar is virtually already a funk classic, gaining fans all over the globe upon its release, not to mention a slew of remixes via the singer’s #LikeSugarChallenge on social media.

The soaring Like a Lady transports the listener to the late 70s NYC disco scene, while Chaka swaggers and struts on the sultry R&B Too Hot. She embraces bold new sonic elements on Don’t Cha Know and Isn't That Enough, while the minimalist groove of Ladylike gives her the freedom to showcase those still-impressive pipes.

The empowering set is packed with nods to the past while looking firmly forward.

Marina Diamandis is back, sans the “and The Diamonds” moniker, for her first original solo material since 2015’s excellent Froot. Handmade Heaven is the first single from an as-yet-untitled album, due sometime in early 2019, according to Diamandis herself.

The song blends the morosity of the human experience with her aspirations of a personal oasis from the world. Her familiar and glorious falsetto feels perfectly at home over a track that is classic MARINA, as odd as that may sound given her recent mononymosity.

In the song, she grasps at attainable bits of paradise – the way perhaps one might create their home as a personal sanctuary - even as she details her feelings of alienation and insecurities in the real world. Whatever this personal heaven of hers may be, it makes for a great return after a rather long hiatus.

“If I’m shinin’, everybody gonna shine,” she repeats throughout with familiar inclusivity that is a hallmark of her music. Another trademark of her music is the cleverness of her lyrics, with audaciously genius lines like “No, I’m not a snack at all / Look, baby, I’m the whole damn meal” and “David, you ain’t bein’ slick /Don’t dare try to cop a feel,” the latter a reference to too-slick men by way of magician David Copperfield.

Deerhunter - Why Hasn't Everything Already Disappeared?

On their latest release, Deerhunter frontman Bradford Cox and crew deliver a deceptively sunny collection of songs about the crush of consumerism and national decay. Less nostalgic than their earlier work, their 8th album is rife with lively tracks about a fatalistic future in a nation perpetually reinventing itself in the shadow of late Capitalism.

On What Happens to People, Cox ponders, “What happens to people / And what can they do / They’re only returning / The powers of youth,” as the working class traverses the line from the cradle to the grave. On the weird Détournement he employs a vocal filter that pitches him both lower and decidedly robotic, as he intones fatalistic greetings and non-sequiturs like, “Your struggles won’t be long/And there will be no sorrow on the other side.”

Recorded in hipster haven Marfa, Texas, this set finds Deerhunter firmly in their “pop phase,” and is somewhat a spiritual successor to 2015’s Fading Frontier.