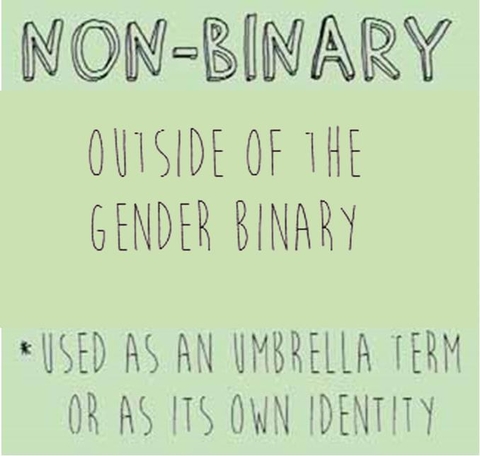 July 14 is International Non-Binary People’s Day. What better way to celebrate an often-underrepresented part of the LGBT+ community than by learning what being non-binary means from different non-binary people? One who is just beginning to use the term to describe her gender while the other has been identifying as outside the gender binary for years.

“I first heard the term after I heard of ‘genderfluid,’ which is what I used to describe myself as. However, as I've been transitioning, my gender evolves,” says Straya Nova Fox, who is a male-to-female non-binary trans person. “You'll hear a lot of trans people talk about transition in the past tense, but for me, I'm constantly evolving. I believe most of us are - including in regard to gender.”

“This is still kind of a new thing for me,” admits Erin Green, a newly identifying non-binary person. “I’m just now figuring out what it means to be non-binary, especially because I’m just starting to identify with it.”

Many cis people and even some trans people don’t understand exactly what it means to be non-binary and how it relates to other gender terms such as genderqueer.

“As simply as I can put it, non-binary is just not fitting into the male-female binary and trans is just when a person doesn't feel like they identify as what they were assigned at birth,” explains Fox. “Genderqueer, I'd say, is basically a non-binary gender. It's a question that warrants discussion between myself and genderqueer people, because I'm not genderqueer.

“There's really not any way a trans and/or enby [non-binary] person can speak for all of us. We all experience gender differently.”

“I didn’t really know what it was. When I was younger I didn’t really like to be pushed in the direction of things that were just feminine, like any kind of toys, any kind of clothes,” says Green, “Football and wrestling was my thing; even soccer. Stuff that was physical contact like basketball and I didn’t really understand why these things were gendered. I wanted out of that.”

“A lot of people don't even realize non-binary is an actual thing. Some people will also argue that there are only two genders,” Fox notes, “A lot of them seem to get really confused, because society has conditioned us to see gender as a thing based on genitals we're born with at birth. Speaking of genitals, surgery. Yes, some enbies will get GCS (gender confirmation surgery).”

“I just related to the term immediately,” reveals Green about when she first heard the word non-binary. “To this entire concept; not just putting people inside of a box.”

On July 14, people identifying as non-binary are recognized for their bravery in being who they are in a world that is not so understanding of such differences and for their contributions to the world.

“So many of us are just so . . . tired of constant erasure,” says Fox, “If I could tell the entire world about anything at all, it would be to listen to us.”