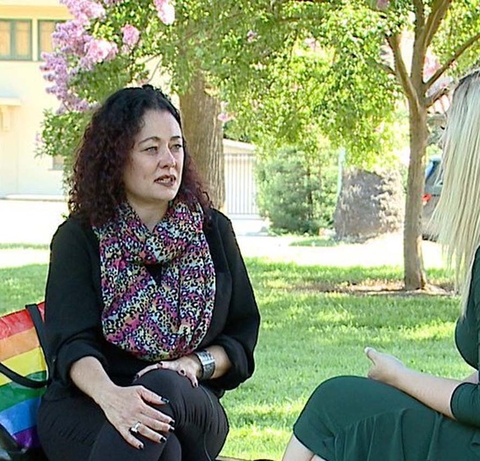 Jamie Thompson was in fear on a Lyft ride. KTXL photo.

(Sacramento) Two days after her Lyft ride took an alarming turn, Jamie Thompson still fights back tears from the encounter.

“My driver proceeded to go on an Islamophobic tirade and an abundance of other hate speech and how members of the LGBTQ community should be offed and perished from this earth,” she explained.

Thompson lives in Sacramento but was on a business trip in Oakland when she hailed a Lyft back to her hotel.

Thompson thinks a bag featuring the rainbow flag which was laid across her lap is what triggered her driver to start spewing hate.

“He started raising his voice and I felt very threatened. I was very scared, but I couldn’t get out of the vehicle because we were on the freeway,” she said. “I was very, very frightened… I felt trapped.”

The alleged encounter left Thompson feeling startled and fearing for her safety.

So, she took out her phone and went live on her social media account.

You can see in the video Thompson points the camera away from the driver — but you can still hear his voice in the background.

“God said he made man… and he made Adam and Eve, not Adam and Steve,” the Lyft driver can be heard saying in the video.

The Lyft driver added that, “God has laid down a program for what he calls right and then man wants to do whatever he wants in his own corrupt rules.”

Thompson reported her complaint to the ride-hailing service immediately but at first — she says Lyft wasn’t very sympathetic to her concerns.

FOX40 reached out to Lyft for comment on the matter.

The company issued the following statement:

“Lyft has a strict anti-discrimination policy and we are committed to maintaining an inclusive and welcoming community. The behavior described is completely at odds with our values as a company. As soon as we were made aware of this incident, we suspended the driver from the Lyft platform and reached out to the passenger to offer support.”

Thompson confirms the company reimbursed her for the ride with a $10 credit, but she says what she really wants is to see change so that moments like this never happen again.