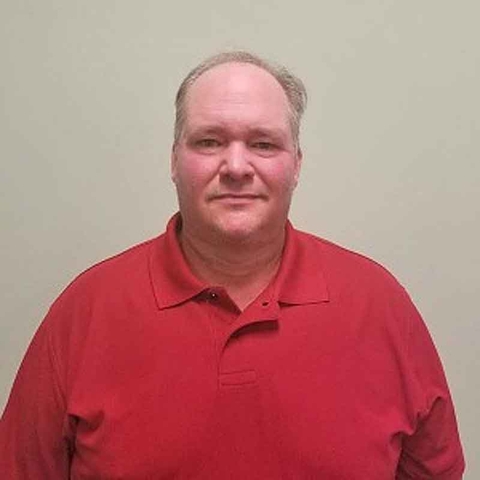 The post has since been taken down, but not before it drew wide attention. One of Chambers’ friends said changing what the mayor posted would take a revolution.  To which Chambers replied, “The only way to change it would be to kill the problem out. I know it’s bad to say but with out killing them out there’s no way to fix it.”

At first, Chambers denied writing the comment. “I never said anything about killing out gays or anything like that,” he claimed in a phone conversation with Fox affiliate WBRC.

His non-apology apology returned again to the “taken out of context” explanation. He wrote: ““I would like to make a public apology to my community, I and I alone am responsible for the comment that was made.

“Although I believe my comment was taken out of context and was not targeting the LGBTQ community, I know that it was wrong to say anyone should be kill [sic] I am truly sorry that I have embarrassed our City, I love this City and while in office I have done everything in my power to make this a better place for our families.

“There are not enough words for me to express how much a regret posting that comment. I hope very much our Citizens and anyone that was hurt by this comment can accept my apology.” 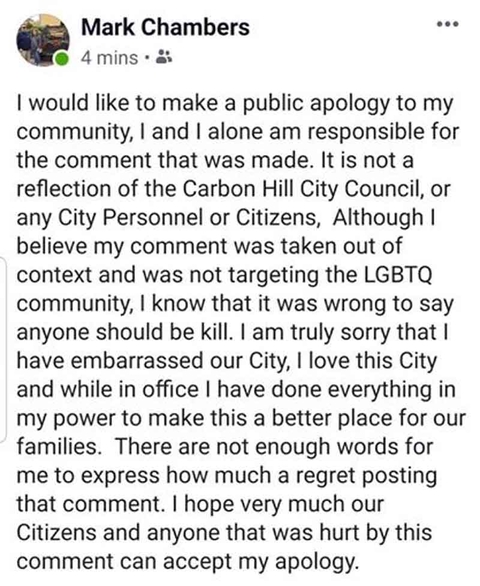 It doesn’t appear that many have done that. “The Human Rights Campaign in Alabama on Tuesday condemned the mayor's remarks, describing them as ‘horrifying, unconscionable and unacceptable’," according to NBCNews.com.

"Carbon Hill Mayor Mark Chambers recently endorsed and defended his own social media posts in which he called for LGBTQ people to be killed. LGBTQ people face disproportionate levels of violence and harassment in their daily lives — a fact that is especially true in Alabama, where there are no statewide LGBTQ-inclusive nondiscrimination or hate crimes laws.

“We can and should expect our elected officials to represent all of us, or at the bare minimum, to protect us.”

"Violent rhetoric has real consequences, especially at a time when the president is rolling back civil rights protections for LGBTQIA+ people and making an already vulnerable population more vulnerable."

Chambers still couldn’t stop digging his hole. ”In an interview published Wednesday in the Daily Mountain Eagle, the mayor repeatedly acknowledged that what he said was ‘wrong’ but continued to defend himself,” according to The Washington Post.

“’I mean, no where in there did I say I was for killing gays or killing transvestites or that sort of thing,’” he said. ‘I was responding to a comment a guy said something about a revolutionary war. What I had said was in a war, you know, the only way to get your way is to kill the other side out.’

“Chambers told the Mountain Eagle that he had no idea his comment would have the effect that it did.

“’I can’t tell you why I said that,’ he said. ‘It was just something dumb and stupid that I said. . . . I don’t believe anyone should be killed for anything that they believe in.’”

Let’s all hope that he means it this time and will just leave it alone. His Facebook page has been made private.