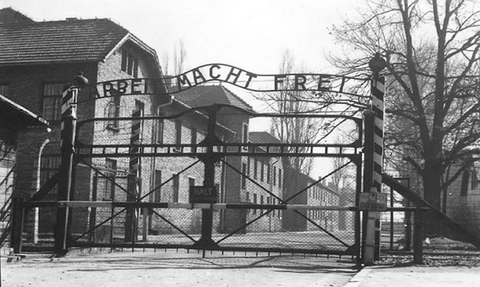 The gate of the Nazi Auschwitz-Birkenau death camp in Poland. File photo.

After the Nazis took over Germany in 1933, they embarked on a campaign of hate and fear. That campaign started with laws diminishing the rights of Jews. It led to the ultimate crime of the Nazi state, the genocide of six million Jews, which we now refer to as The Holocaust.

The Nazis also killed five million other civilians, including Roma people, homosexuals, Jehovah’s Witnesses, Polish people, Russian prisoners of war and others, bringing the number of murders to 11 million human beings who had no crime other than being the targets of hatred and fear.

We remember these innocent victims each year on Holocaust Remembrance Day, this year on Sunday, January 27. That date is the anniversary of the liberation of the Nazi concentration and death camp at Auschwitz-Birkenau by Soviet troops in 1945.

Regrettably, genocide seems to be part of human nature. In the 20th Century, there were many other examples of one group killing another due to racism, hatred, and fear of the “other.” In 1915, 1.5 million Armenians were killed by Turks, a disaster denied by Turkey to this day.

These events are not mere historical anomalies. They continue to this day in Myanmar (formerly Burma) where the death estimates range from 9,000 to 43,000.

History is littered with these events, stretching back into the past since recorded history began. The Holocaust and associated genocides by the Nazis and their allies are the worst, driven by anti-Semitism, racism and hatred.

These events are usually done by tyrants and dictators who mine the fears and prejudices of citizens to foment these heinous crimes against humanity.

We are not exempt. In the forced march of Native Americans, thousands died of starvation and disease. Nor can we simply shake our heads at what Nazi Germany did, when we were complicit in turning away Jewish refugees, the most infamous example being the refusal to allow the steamship St. Louis to land here in 1939. Many of the refugees turned away subsequently died in the Holocaust.

But that one event was part of a nativist fear of Jews and the racism of our country’s immigration laws. Fear of immigrants in the United States is neither new nor extinct. In addition to Jews, Irish refugees from the potato famine in the 1800s met with blatant discrimination. Asians were banned from immigrating to the United States for long periods in the late 1800s and early to mid-20th Century.

And we must never forget, as well, the original sin of the United States as a country – the institution of human slavery. The consequences of that still haunt us and hurt us today.

I’m not saying the current furor over immigration by mostly non-white people will lead to genocide. But the hatred and fear of people who are not like us continue to dwell among us and to poison our national discourse.

We see anti-immigrant sentiment worldwide, with the most notable instance besides our own being the immigration crisis in Europe, which is leading many countries to turn to more conservative and reactionary governments.

We must never forget what racism, hatred, and fear have done to innocent human beings. We need to ponder that every day as we read and watch the news.

Holocaust Remembrance Day on January 27 gives us a day to focus more intensely on the causes of the Jewish genocide and to ponder how we might, individually and collectively, erase this kind of poison from our daily lives, and our world.