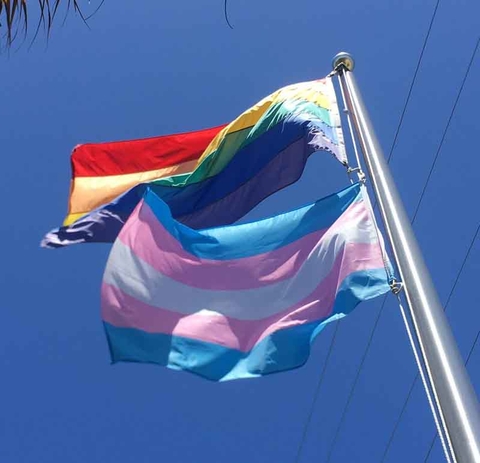 The transgender flag and the rainbow flag flying together. Twitter photo.

The American Civil Liberties Union and several other groups filed a lawsuit Tuesday challenging the repeal of an Obama-era regulation that prohibits discrimination against patients, including those who are transgender or have had abortions.

The Department of Health and Human Services proposed the new rule last month reversing Section 1557 of the Affordable Care Act, known as the Health Care Rights Law. That section of the act "prohibits discrimination based on race, color, national origin, sex, age or disability in certain health programs and activities."

A rule enacted in 2016 interpreted the ban on sex discrimination to include discrimination on the basis of gender identity, building on similar interpretations in other federal civil rights laws and court rulings, and termination of pregnancy.

In a statement, the National Family Planning and Reproductive Health Association, which filed the lawsuit with the ACLU, Public Health Solutions and the New York Civil Liberties Union, said the repeal of the regulation "forces health centers that receive federal funds to employ individuals who refuse to perform essential job functions, without any regard for the wellbeing of their patients or public safety."

The association said in the statement that the change is "likely to embolden refusals to provide a range of other health services" and that under the policy, "a hospital receptionist could refuse to schedule an appointment for a transgender patient seeking gender-affirming care and an orderly could refuse to transfer a patient to the operating room for an emergency abortion."

"The rule could eviscerate the delivery of high-quality family planning services in this country," Clare Coleman, the association's president and CEO, said in the statement.

"Health care providers' beliefs should never determine whether patients can access essential care they need to stay healthy," Coleman said, adding that the lawsuit is seeking "to make sure that patients get the critical information and care that they need, and to ensure that the patient's well-being is paramount."

Last month, when the rule was proposed, the department said that in light of an injunction issued in 2016 against the original rule, the new proposal was to "address the over broad interpretations" of Section 1557 found by the court and amend the Obama-era rule to "reduce the significant confusion and unjustified burdens caused."

The new lawsuit is the latest challenge to the recent move by the Trump administration. In May, New York's attorney general, joined by a coalition of 23 states, cities and municipalities, filed a lawsuit against the administration, similarly arguing that the new regulation would let health care providers discriminate and refuse care to patients based on religious or moral beliefs.