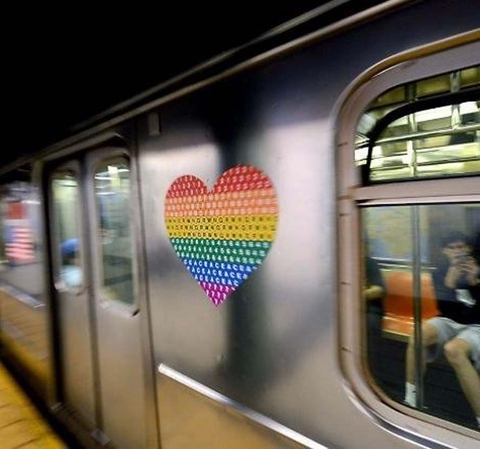 New York's MTA put up Pride logos on 50 train cars, which will appear for all of June. NYCT Subway Twitter photo.

To mark 50 years since the Stonewall uprising, New York's Metropolitan Transit Authority has put its own Pride logos on 50 train cars across the city.

"The Pride Train is now arriving!" reads a tweet from the MTA's Twitter account for subway service updates. "Come as you are and help us celebrate #Pride2019."

The logos will appear for the rest of June on 1 line trains, which run between the Bronx and Lower Manhattan.

The Pride Trains are one of several ways the MTA is celebrating Pride Month. There are new Pride-themed MetroCards with New York Pride logos on the front and a calendar of city Pride Month events on the back.

Half a million of the special MetroCards have been printed and are available at select stations until they run out.

"The MTA celebrates diversity and inclusivity, and we're incredibly proud to mark the 50th anniversary of the Stonewall Uprising and the WorldPride events in our service area with our special Pride trains, and limited-edition MetroCards and merchandise," Shams Tarek, a spokesperson for the MTA, said in a statement.

The MTA also has Pride-themed merchandise, including T-shirts, magnets and mugs, available on the New York Transit Museum website and at the three Transit Museum stores.

For the third year in a row, Pride-themed posters have returned to subway stations across New York. Meant to resemble official signage with service information, the posters read, "No bigotry, hatred, or prejudice allowed at this station at any time."

The posters include "travel alternatives" such as "Just love" and "Open your heart."