NFL, NBA, NHL, MLB and WNBA are all marching in NYC Pride March 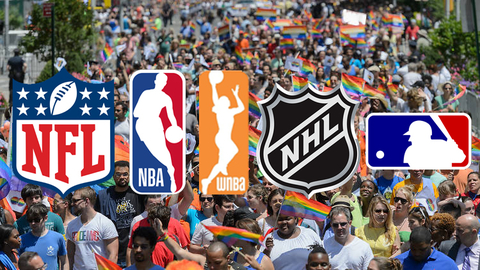 The New York City Pride March on June 24 will feature the largest collection of professional sports leagues ever for an LGBT+ Pride March or Parade, according to OutSports.

Almost all of the major professional sports leagues based in the United States will all be taking part in the Pride March.

The NFL, NHL, MLB, NBA and WNBA are all registered as leagues to march in the parade and will have floats.

Major League Soccer and the National Women’s Hockey League will have employees and players marching as well.

Related:
All 30 MLB teams are supporting #SpiritDay
Golden State Warriors to host LGBT+ Pride Night
Former NFL star planned to hide his sexuality until retirement and then kill himself

The National Football League will have a float in the parade that features former NFL player Ryan O’Callaghan, who came out publicly last year.

The NFL is also sending O’Callaghan to the Outsports Pride Summit that Friday.