Once opposed to intervention, Trump says he can be flexible 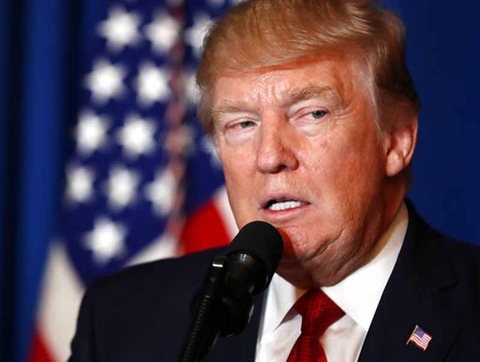 Palm Beach, Fla. (AP) — In the aftermath of President Donald Trump's surprise strikes on Syria, his allies and adversaries have searched for some broader meaning in his decision.

Is Trump now a humanitarian interventionist, willing to wield American military power when foreign governments threaten their own citizens? Is he a commander in chief who once warned against intervention in Syria but is now prepared to plunge the United States deeper into the conflict? Is he turning on Russia, one of Syria's most important patrons, after months of flirting with closer U.S. ties with Moscow?

"I don't have to have one specific way, and if the world changes, I go the same way, I don't change," Trump said Wednesday, a day after the chemical weapons attack in Syria that compelled him to order airstrikes against a government air base. "Well, I do change and I am flexible, and I'm proud of that flexibility."

Allies in the Middle East and Europe who panned Trump's efforts to ban Syrian refugees from the United States cheered his decision to strike against Syrian President Bashar Assad's military after viewing images of young children killed in the chemical attacks. Yet they did so without any clear guidance from Washington on the next steps in Syria.

Trump's ambassador to the United Nations, Nikki Haley, said the United States was willing to take more action against Assad, while White House officials cautioned that the strikes did not signal a broader shift in U.S. policy.

Mark Feierstein, who served in the National Security Council under President Barack Obama, said it's difficult to glean a direction for U.S. policy from Trump's actions in Syria because Trump "is not moored to any coherent ideology or set of ideas."

But for some of Trump's supporters, ideological elasticity is a virtue for a president who took office with no practical foreign policy experience. They say it gives the former real estate mogul breathing room to learn on the job and accept advice from more seasoned advisers.

"I think as time goes on, every day that has passed, he more and more has understood the gravity of U.S. leadership," said GOP Sen. Bob Corker of Tennessee, the chairman of the Senate Foreign Relations Committee.

Trump ran for office as a Republican but has few ties to the party's traditionally conservative philosophy. He often has relied on his flexibility as a way to reassure Americans that some of his more unconventional and controversial proposals were merely suggestions.

Yet on some issues, he has shown a willingness to follow through. He has ordered construction of a wall along the U.S.-Mexico border and signed executive orders banning entry to the U.S. for people from some majority Muslim countries, including Syria. Those travel orders have so far been blocked by the courts.

The angry reaction to the Syria strikes from some of his strongest campaign supporters showed that they expected him to fulfill promises to stay out of Syria.

"Those who wanted us meddling in the Middle East voted for other candidates," Ann Coulter, the conservative commentator, wrote on Twitter.

As a candidate and private citizen, Trump cast Syria's civil war as a quagmire from which the United States should steer clear. Until the chemical weapons attack, Trump mainly saw Syria as a hotbed for terrorists seeking to attack the U.S. He rarely spoke of the hundreds of thousands killed and the millions displaced during the six years of clashes between the Assad government, backed by Russia and Iran, and opposition groups.

"He seems to put great score in unpredictability, and that's not such a bad thing in foreign relations if it has some kind of framework around it," said Peter Romero, a top State Department official in the Clinton administration. But Romero said that if Trump is "being erratic, then it'll have very little impact."

Trump is hardly the first president to change his approach to America's role in the world. In 2011, President Barack Obama justified intervention in Libya by citing specific criteria, including the imminent slaughter of civilians. When most of the same guidelines appeared applicable in Syria, particularly after a deadly 2013 chemical weapons attack, Obama backed away from planned military strikes.

"There's always a transformation that takes place from a person who wins the presidency, and then once he assumes office he necessarily sees the world from a different perspective," said Edward Djerejian, a former U.S. ambassador to Syria and Israel who now directs Rice University's Baker Institute for Public Policy. "Trump suddenly realizes he's responsible for much of the world."

Another consequence of Trump's shift on Syria has been a strikingly tougher tone from his administration on Russia. Secretary of State Rex Tillerson, whose close ties to Russia raised questions during his confirmation hearings, slammed Moscow for either being "complicit" in the chemical weapons attack or "incompetent."

Corker was among those who welcomed that shift. "The beginning thinking of the administration around Russia was somewhat unsettling, but you've seen that evolve," he said.

But Trump's flexibility means there are no guarantees that he's prepared to fully abandon his efforts to forge a partnership with Russia on counterterrorism, nuclear proliferation and other issues.

Skeptics noted that a confrontation with Russia over Syria was well-timed for a president whose campaign is under investigation by the FBI and congressional committees for possible coordination with Moscow during the 2016 election. Also, Trump himself has yet to match the harsh criticism of Moscow that some of his advisers have levied.