The war on Sappho 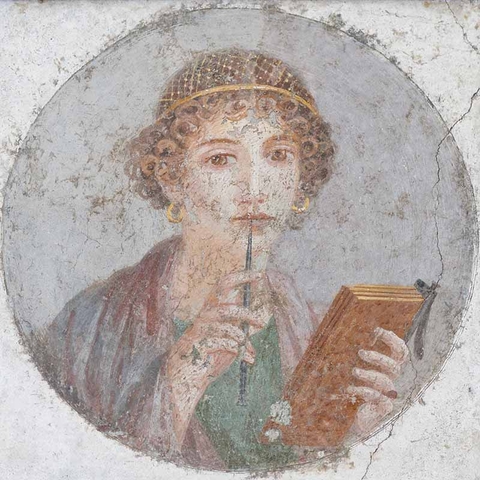 Look up the sexuality of Sappho, ‘The Poetess’ of Lesbos who lived during the late 7th and early 6th century B.C.E. and you will find a war taking place between the lesbians (so named for the lyricist’s birthplace), bisexual and pansexual and queer women of Tumblr.

While this is a new fight for Sapphic (women who love women) women to be fighting, the battle over Sappho’s sexuality has been warring since a few hundred years after her death.

As a Lesbian woman (woman from the Isle of Lesbos), Sappho would always have a target on her back. Though Plato called her “the tenth Muse”, women from Lesbos were already known for their beauty and unquenchable heterosexual lust. During the 4th century B.C.E., Athenian playwrights would often use female characters from Lesbos, of which Sappho was a favorite, to mock onstage as man-hungry and sex-crazed.

Even her famous young death by leaping from a cliff because of her unrequited love for the man Phaon, which was popularized by the Latin poet Ovid, has been proven mythology as she wrote many poems in her old age and Phaon was mentioned in none of them. The male poets of Lesbos who she is often attached to were either too old or too young to have had relations with her during life.

From the church burning her works for their homoerotic nature, to the Victorians’ acceptance of them, Sappho’s homoeroticism has been covered up and heteronormalized over the years.

Sappho, as far as is known about her, was a woman with a passion for other women and female sexual expression who earned money by writing beautiful verses to be sung with a lyre for weddings, funerals and religious festivals. She especially loved the goddess Aphrodite. She had a lover named Atthis who broke her heart when she left Sappho for the poet’s rival, the country girl Andromeda and then further hurt both women when she moved to the kingdom of Lydia to marry a wealthy man.

Ultimately, Sappho was like the rest of us. She hated growing old and was often mocking her short, dark complexion while still fearing the loss of the beauty she knew she had. She was vain and did not want for much, but love and beauty were always on her mind.

In my opinion, I don’t think she would have wanted anyone to claim ‘ownership’ of her. To see this woman, defined by her pure love of women, added to lists of “bisexual poets” and “queer writers” is just more misunderstanding of Sappho. And by using these myths and jokes to assert her “not gay” status, we are further mocking her just as maliciously as the church burned her poems for their “offensive content”.

While the Greeks did not have a word for homosexuality or bisexuality, there was an understanding that some women preferred women and some men preferred men. This did not change who one married but did mean that while people understood their sexualities it did not define who they were as a person.

By allowing Sappho’s sexuality to define us as Sapphic women and to force her to conform with our own preferences is just as bad as us being told that we must only define ourselves by how much we are attracted to men. It’s heteronormalizing our definitely not heterosexual sexualities and that simply isn’t okay.