No excuses; wear a condom 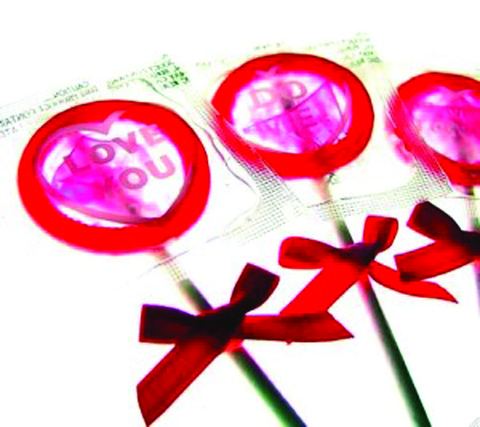 Back in the day, condoms were much more primitive. People used something like an animal intestine to cover the penis or an animal bladder inserted into the vagina or rectum.

For example, the first use of a condom was a bladder of a goat introduced into the woman’s vagina which protected the woman from disease.

Contemporary condoms come in a variety of sizes, so the diminutive male can find a good fit as can the more amply endowed. Fit is important both for comfort and effectiveness.

A broken condom is bad news, but so is one that falls off.

Timing is very important. Too often, people wait too late before remembering that they need to put on a condom. It should be placed on the tip of the penis as soon as it is erect. With a little practice, this can be incorporated into foreplay very well (at least that’s what I’ve been told).

Once the man has ejaculated, remove the condom and dispose. A fresh one should be used for the next romp.

If you aren’t experienced with how to use condoms, pull up a YouTube video or ask your health care professional. Educate yourself by reading the literature provided about the different brands. Find what works for you and use one every time to protect yourself and your partner(s).

A female (or internal) condom is a pouch that’s inserted in the vagina or anus before sex for birth control and protection against sexually transmitted infection (STI). It works like other condoms, except it’s worn on the inside.

When used consistently and correctly, both male and internal condoms provide protection against pregnancy and against STI’s. Condoms have been around almost literally forever. Scientists have discovered cave drawings dating back to about 11,000 B.C. that may depict penises encased in a type of condom.

To help maximize the durability of a condom, pay attention to its expiration date. You should store condoms in a cool, dry place away from direct sunlight or another source of heat (other than your partner). They’re widely available with or without latex and spermicides.

Condoms don’t require a prescription or permission from your doctor, and you can buy them almost anywhere, from pharmacies to grocery stores to big box stores to gas stations. You can even get them in vending machines in many public restrooms (you never know when an opportunity will present itself).

Never use a petroleum based product such as Vaseline on a condom as this will degrade the latex and essentially poke holes in it. Always use a water based lubricant that is designed to be used with condoms.

If I polled people who don’t use condoms when they have sex, I would get a variety of answers: “It kills the spontaneity and romantic mood,” “I don’t like the way they feel,” “They don’t fit me,” “I’m too old to get pregnant,” “I forget until it’s too late,” “My partner doesn’t like them,” “We can’t get pregnant,” “They cost too much.”

If I could pull a lever that opened a secret trap door beneath these people sending them into the pit of doom, I would. These are not good reasons to put your health and that of your partner at risk.

If you can’t afford the cost of condoms, many community agencies who provide health services hand them out for free. As with any product, there are many, many styles and varieties of condoms on the market.

You can’t tell a person’s HIV status by looking at them, nor can you tell if they have other STI’s. That hot guy you just met may be well groomed and smell pretty, but you can’t see his status from just checking him out.

Remember, you are responsible for protecting yourself. Just because that hot guy (or gal) tells you they are negative does not mean they are.

Stay safe and have a hot and romantic month.